​Football fans, no matter who they support, are a remarkably fickle bunch. This was exemplified in vivid fashion on Saturday afternoon, as returning former Chelsea favourite José Mourinho - now of Manchester United - became involved in a touchline brawl before being subjected to a barrage of abuse from the Stamford Bridge faithful.

True to his nature, he ​Bluesmanagerrevelled in the glory of having the club's supporters passionately roar his name game after game. He seemed untouchable, a resplendent Portuguese prince, but things soon turned sour in his third season at the club and before you could say 'backroom bust-up' he was gone. Six years later, after successful spells with Inter and Real Madrid, Mourinho returned to Chelsea to mass delirium. However, despite winning them another league title, his second season saw him Upon his first return to Stamford Bridge with United, the first nail in the coffin of his relationship with Chelsea fans was well and truly slammed home by Antonio Conte - whose exuberant celebrations as the Blues powered to a 4-0 win enraged Mourinho. Blues fans laughed along with their smooth new Italian Papa; Mourinho's outburst diagnosed as a case of sour grapes.

On Saturday, playing their first Premier League match at Stamford Bridge since 'the incident', Mourinho claimed he'd not be drawn into a similarly provocative reaction if his side were to score a winning goal. 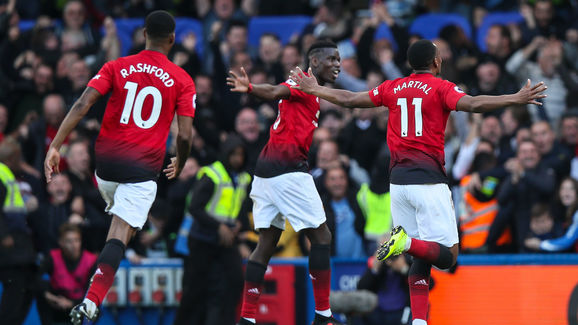 In dramatic fashion, ​Ross Barkley's last gasp equaliser saw Stamford Bridge rock to its very foundations as ​Chelsea snatched 2-2 draw. Caught up in the hysteria, Blues coach Marco Ianni then goaded Mourinho with his celebration - prompting a touchline brawl of epic proportions. The former Porto man had taken the bait, as pre-match tensions boiled over in a flash of red.

As a lifelong Blues fan, the treatment of Mourinho by some sections of the support does leave a rather bitter taste in the mouth. Under his guidance, we enjoyed our most successful spell in decades, finally winning league titles and breaking ​Arsenal and United's relentless stranglehold on the competition.

With Chelsea now a mighty global brand, it's easy to forget that

The initial awkwardness akin to a former lover returning to pick up their belongings has swiftly turned hostile over the last couple of seasons - with Chelsea fans now in effect hurling his clothes out the bathroom window; claiming they always found his relentless snoring to be an intolerable habit and that his younger brother was far more handsome anyway.

revolutionat Chelsea in the '00s - something which has to be respected. T