​With the international break over, Udinese welcome Napoli to the Stadio Friuli on Saturday in a big game for both teams, for very different reasons.

Udinese need to get back to winning ways after a shaky start to the season. New manager Julio Velázquez has had a tough start to life in Italy, with his side sitting 15th in Serie A. Three consecutive losses have seen the Zebrette drop from eighth to just three points off the relegation zone.

Meanwhile, Napoli are in excellent form, sitting second in Serie A. They have lost just one of their last seven games in a defeat to league leaders Juventus before the international break.

Here is all you need to know about Saturday’s game… You need look no further than six months ago for a classic encounter between the two teams, when Napoli beat Udinese 4-2 near the conclusion of the 2017/18 Serie A season.

Despite going 2-1 down, the Partenopei scored three goals to secure all three points at the Stadio San Paolo.

The win in Naples saw them extend their unbeaten run to six games, which was then lengthened to seven as they pulled off a huge 1-0 win over Juventus the following week.

Although they would go on to finish second behind Juve, it was a classic game of football - featuring goals from Lorenzo Insgine, Raul Albiol, Arkadiusz Milik and Lorenzo Tonelli - that really showed Maurizio Sarri’s side at its best. The Swiss will be pivotal in keeping Insigne under wraps, hoping to repeat his World Cup performance against Neymar and Brazil, where he kept the Selecao’s poster boy quiet for the whole game in a fantastic performance.

Insigne, meanwhile, will be eager to add to his tally this season. The Italian has played every league game this season, scoring six goals to put him second in the league’s scoring charts. One of the most sought-after centre backs in football, Napoli’s Kalidou Koulibaly has been linked with a reunion with former manager Maurizio Sarri at Chelsea for months, and you can see why. The solid no nonsense centre-back has been outstanding this year, playing every game at the heart of defence for Napoli.

On Saturday night he will have to deal with Udinese's star man Rodrigo De Paul. Largely unknown outside of Italy, De Paul has had a great start to the season, playing every game and scored four goals, half of what the Udinese have mustered all season. 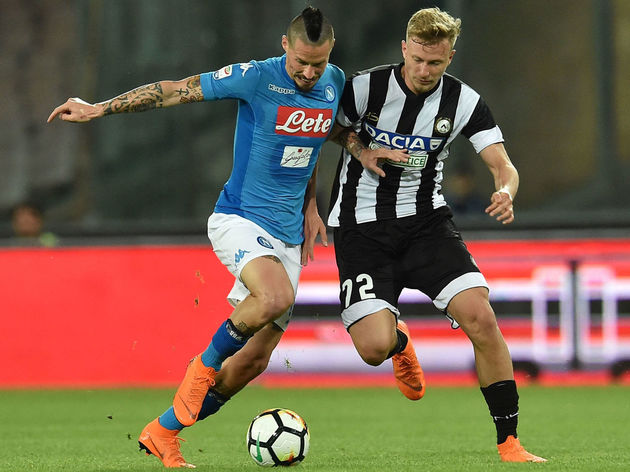 Napoli’s recent record against Udinese is encouraging for the away side, having won their last four encounters. However their overall record in Udine is not one to savour, where they have lost 13 of their 36 meetings, in contrast to six wins.

It will be interesting to see how Ancelotti will approach this game. Will he heavily rotate his lineup, with one eye on Wednesday’s Champions League game at Paris Saint-Germain? Or will he go all out to keep up the Partenopei’s chase of Juventus at top spot?

It is no doubt that both teams will be playing to win. Udinese are aiming to get away from the relegation zone, whereas Napoli must keep up the pursuit on league leaders Juventus and maintain their title challenge.