World Cup winners France beat Germany 2-1 in Group A1 of the Nations League on Tuesday night, thanks to an Antoine Griezmann double in the second half, after Toni Kroos had given Germany the lead.

The world champions earned a slim victory thanks to a late penalty at the Stade de France, as Didier Deschamps' slightly underwhelming side heaped more misery onto the Germans, who have just one competitive win in 2018.

In the 14th minute, Germany were given a golden opportunity to take a surprise lead against the World Cup winners. A Leroy Sané cross struck the arm of Paris Saint Germain's Presnel Kimpembe, giving Joachim Löwe's side a penalty. Toni Kroos stepped up and duly put the chance away, putting Germany 1-0 up. 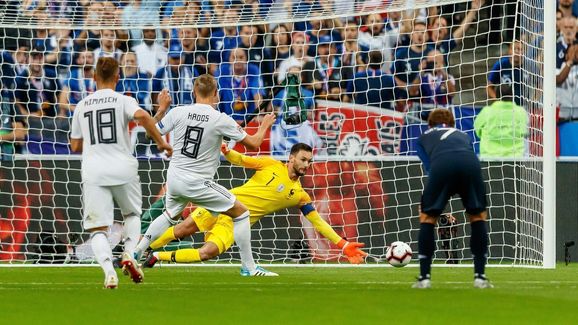 The remainder of the first half belonged to the Germans, as they consistently hit the French on the counter with their pacy front three.

However, the away side's dominance was occasionally interrupted by pieces of Kylian Mbappe magic and industry, as the youngster gave his all to engineer an equaliser.

11 minutes into the second half, France found their equaliser. Lucas Hernandez's cross from the left was met by his club teammate Griezemann, whose header flew past Manuel Neuer and into the top corner.

In the 78th minute, France were awarded a penalty of their own as Blaise Matuidi was brought down by Matts Hummels in the box. Griezmann stepped up and dispatched the penalty with confidence.

Here's our breakdown of this one...

Off the back of their impressive World Cup triumph, the question surrounding France was whether they could keep up their good form and avoid complacency. The answer to this question, based on this match, was encouraging. Whilst France were not creatively brilliant, as might be expected, it was a similar performance as was seen in the early stages Russia. Deschamps' side weathered the storm in the first half, and were able to grind down a determined German side to secure three points.

The litany of stars at Deschamps' disposal means even if Paul Pogba has an off day, there are many more who can step up.

STAR MAN - France's golden boy, Kylian Mbappe, was once again the star of the show for the French side. The World Cup winners struggled to create chances throughout the game, but Mbappe often single-handedly drove them forwards.

im falling in love with mbappe somebody please stop me

The Paris Saint Germain forward used his blistering pace to make incisive runs in behind and carry the ball forwards with ambitious dribbles.

It continues to stagger that Mbappe is still just 19 years old.

WORST PLAYER - Manchester United's Paul Pogba has endured a frustrating start to the season and there was little improvement against Germany. The Frenchman, as the only naturally creative midfielder in the starting eleven, was tasked with providing the link between defence and attack.

However, Pogba was unable to create any real clear-cut opportunities for his side and occasionally gave the ball away whilst under little pressure. The Manchester United midfielder clearly has heaps of ability, but he is struggling to really impose himself on matches lately.

Paul Pogba needs to calm down, completely off his game here. Shoots from outside of the box aimlessly when he has multiple other options & concedes a stupid foul in the middle of the park out of frustration.

After an extraordinarily disappointing defence of their World Cup crown in the summer, all eyes have been on how Germany would react in the brand new Nations League. There was no better platform for Joachim Löw's side to prove their metal than against the team that took their World Cup title.

Whilst the performance was nowhere near the level of some of Germany's 2014 World Cup displays, there was a notable improvement on their summer showing.

The Germans seemed more assured defensively and provided pace on the counter, which was sorely missed in the summer. The result will have disappointed Löw and the German fans but parts of the performance with a somewhat experimental side must have been encouraging.

STAR MAN - Toni Kroos, who has endured a difficult start to his domestic season with Real Madrid, was back to his ice-cool self against France. The German midfielder controlled the tempo of the game throughout, choosing when to play simple and when to drive his side forwards on the counter.

Against a world class French midfield, Kroos often looked the most assured midfielder on the pitch. Real Madrid's manager, Ju 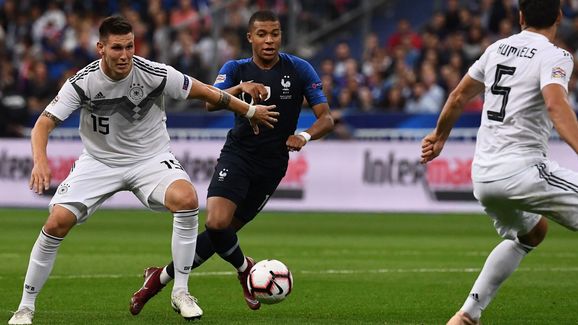 France's next fixture comes in November as they face a high-flying Netherlands side in the Nations League. Deschamps' side need only to avoid defeat in that fixture in order to win their group.

Germany, on the other hand, face Russia in a friendly before they also take on the Netherlands. Questions will be asked of Löwe after his side have now lost six games in ten matches.