​Eden Hazard has admitted to feeling regret over how his time with Jose Mourinho unfolded towards the end of his tenure at Chelsea as he confessed a desire to work with the Portuguese manager again.

Hazard played for Mourinho for two years, between 2013 and 2015, and was an integral member of the team which won the Premier League and League Cup during the 55-year-old's second stint at Stamford Bridge. 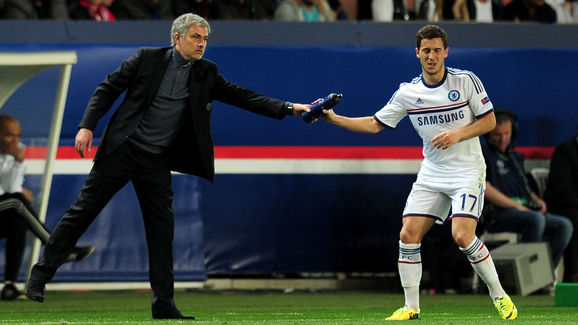 However, the ebbs and flows of Mourinho's career ensured a poor start to his third season ultimately led to his sacking midway through the 2015/16 campaign - and ​Hazard, feeling partly responsible, sent a text to Mourinho apologising for his performances.

"I don't regret many things in my career, but that I have not been able to work with Mourinho at Chelsea anymore is one of them," Hazard​HLN

"In 12 years I've only had one bad season, the last six months under Mourinho, and it was partly my own fault. After the title, we asked Mourinho for extra holidays. I came back totally out of shape.

Fascinating comments from Hazard on Mourinho via @HLNinEngeland. I genuinely hope the boss can turn it around. All parties must take their share of the blame for the poor start, put their differences aside and do their best for the club going forward. Roll on next Saturday! #mufc

"We had a team that could win more trophies. We just ended up in a negative cycle.

"I sent him a message to say I was sorry he had gone and that I was sorry. We'd enjoyed all that success together, but this time we hadn't. I felt a little bit guilty because I'd been player of the year. I'd been one of the most decisive players, and then I performed less."

Chelsea finished 10th in the 2015/16 season, with just 50 points, while Hazard scored only four goals all season.

The disappointing third season is a cycle which appears to be occurring once again for Mourinho as pressure continues to mount following Manchester United's worst start to a Premier League season. However, Hazard refused to criticise his former manager.

"The last season under Mourinho was not enjoyable. We didn't win, we got into a sort of routine, training without having fun, it was better for all parties that we parted ways," he continued.

“If the results are poor, he starts criticising his players – you know that, but afterwards I’ve been able to accept that, it’s part of his character.

“If you win, Mourinho is the best coach you can imagine. Then he is a friend of yours – you can do whatever you want (laughs). Want one day off, he gives you two. If everything goes well, Mourinho will experience football like me: with ease.

"Mourinho's image of an extremely defensive coach isn't completely right. He is far from adventurous like Pep Guardiola, but the season in which we became champions, we have made many goals and played good games," he added.