If there's one thing that Manchester United fans have been clamouring for in the wake of Sir Alex Ferguson's retirement, it is a Director of Football to oversee the footballing side of the business. Because, despite heavy protestations claiming the contrary, their current executives are not the most football-savvy operators.

This has become abundantly clear during Jose Mourinho's tenure; chants of "Jose's right, the board are sh*te" were echoing around Old Trafford after Newcastle's second goal went in on Saturday.

Of course, Mourinho and his fearsome pinky finger were able to cajole the side into a spirited second half comeback on that occasion, saving his own bacon in the process. But one win over probable relegation fodder does not paper over the fissures that currently exist at the heart of 'United', nor does it change their fraught, conflicting transfer operations. 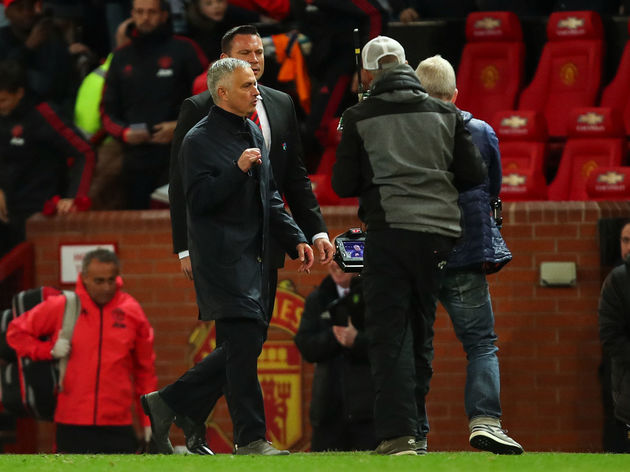 These divisions between the 55-year-old manager and his superiors will not be solved until a Director of Football is appointed to bridge the gap between the two. Recent reports have been circling that the role will be filled within the year - but who can meet such lofty requirements?

Well, there's only one man who is sufficiently versed in steering a club mired by a crisis stretching across fans, players and board - Monsieur Arsene Wenger.

It is Wednesday the 31st of October 2018, and for Ed Woodward fright night has become fight night. The club have stabilised somewhat since the Newcastle game, unbeaten in three games against Chelsea, Juventus and Everton - though they have drawn all three 0-0, and Romelu Lukaku has been playing in a six at the back, with Scott McTominay up front. The discord is duly still palpable.

The 46-year-old executive is in his corner (office) at Carrington receiving some treatment and a pep talk from his assistants in between round seven and eight of his ongoing crisis talks with Jose.

The two men are at a predictable impasse. Mourinho is slicing through Woodward's defences by reeling of the numerous trophies he's won and centre backs he's nurtured, including his recently converted number nine.

But the Executive Chairman is successfully counteracting these flurried tirades with snapshots of the ​Premier League table, as well as an 100 page slideshow of Eric Bailly and Victor Lindelof's most storied mistakes. Despite holding his own so far, Woodward's assistants can tell he's flagging, and are aware his Portuguese opponent is in the same boat, because ​Paul Pogba is Instagram-living his recuperation from the other room.

Just as the two are about to re-enter the ring (boardroom three), one of the assistants, wary of both men's health, proposes an armistice on the comments section of the Insta video: Mourinho can keep his job under a new Director of Football, but Woodward gets to choose who it is.

Both parties feign reluctance to throw in the towel in order to safeguard their dignities, but quickly succumb to the idea once they suss the other is willing.

The next morning, when the former investment banker is mulling over his Directorial options, sneering at these so-called football 'Einsteins' who know the sport so well, he has a sudden, sinister epiphany. He doesn't need a loud mouthed ex-player, or an established candidate like Monchi. So he gets him, simple as that. Indeed, he was perhaps expecting a little more friction, until he contemplated what he had offered the Frenchman - the chance to govern and mediate a large proportion of his greatest rival's life. It's mana from heaven for the guy.

The best part of it for the 68-year-old, is that he agrees a deal with Woodward whereby Mourinho doesn't know of his appointment until the joint press conference announcing his arrival.

Wenger's opening statement turns out to be a monologue fit for SNL. The man repeatedly rips the current state of affairs at the club, alluding to the woeful mismanagement on and off the field, and even weaving in a voyeur joke that brings down the house. All the while, Mourinho just grins and bears it, like you would a public vasectomy, which in many ways it was, professionally speaking. And yet, this unlikeliest of alliances produces miraculous results on and off the pitch. Wenger's influence on the former is, for some reason, best seen in the upturn in form of Paul Pogba and ​Anthony Martial. But in fairness the whole attack seems rejuvenated.

Come the 17th of December, the anniversary of his third season sacking at Chelsea, things are comparatively rosey. Passage to the ​Champions League knockout round has been secured, and the Red Devils are back on track for a top four finish domestically.

Funnily enough, the two became increasingly close to each other during this period, almost paralleling Will Ferrell and John C. Reilly in Step Brothers. Mourinho even took to berating the press and opposition with the combined stats of the two men, with 'we' becoming the pronoun of choice at Old Trafford.

The highlight of course came at Old Trafford for the visit of ​Arsenal. In a move evoking Tim Sherwood at Swindon, the Portuguese tactician invited his French colleague to sit alongside him in the dugout, with the sole job of staring down Unai Emery throughout the encounter. United won the game 8-2, and the two winners chest bumped and then dabbed in unison at full time to celebrate. Obviously, it wasn't all sunshine and rainbows and dabs. The January transfer window proved to be a testy time, with Wenger's frugality rubbing up against Mourinho's careless financial abandon. Several bust-ups were had over the Frenchman's relentless propagation of nameless 18-year-olds from his hometown.

But, ultimately, their overall business was shrewd. Aaron Ramsey was accrued in a deal which earned them £20m and the privilege of being rid of Alexis Sanchez, much to the joy of the Welshman, who paid for a quarter of the fee just for the pleasure.

After reaching a Champions League semi final, and sealing qualification for the 2019/20 season with an admirable third place finish, things only got better for the dynamic duo. I don't want to spoil it all, because it's a wild ride, but let's just say United's strange Kanye West shout-out was apt - because ​Manchester United were indeed made great again.