​Eric Dier's first goal of the season was enough for Tottenham to earn a 1-0 win over Cardiff at Wembley.

It took Tottenham just eight minutes to find the breakthrough, when Eric Dier pounced on the loose ball to fire home, after Davinson Sanchez's header was deflected into the midfielder's path following

A first #PL goal of the season for Dier gives @SpursOfficial an early lead#TOTCAR pic.twitter.com/GgTRXoD7pz

Although Tottenham came away from the game with all three points, they were fortunate that their wastefulness in front of goal didn't come back to haunt them.

Harry Kane, Lucas Moura and Son Heung-min were all guilty of missing chances that should've been taken, either through poor finishing or some last-ditch defending from Cardiff, which would've made their afternoon a far more comfortable one. Spurs still managed to create chances without the attacking talents of Dele Alli and Christian Eriksen which would please Mauricio Pochettino, although his side's inability to finish those chances clearly wouldn't have.

In a close game, the defence capabilities of Toby Alderweireld were pivotal for Spurs to hold on for the win.

With Jan Vertonghen facing a spell on the sidelines, having Alderweireld in this form will be important for Spurs.

For the second match in a row Toby Alderweireld saves Hugo Lloris from the embarrassment of a mistake nearly resulting in an almost certain goal.

Spurs should be still be doing everything in their absolute power to keep the Belgian centre-back at the football club.#THFC #COYS

Toby Alderweireld is the best defender in the EPL .

Selected ahead of Ben Davies at left back, Danny Rose was fortunate not to be punished for lapses in concentration in the first half.

Josh Murphy ran off him twice after initial flick-ons from Callum Paterson, and was bailed out twice, when against better opposition he might not be so lucky.

Danny Rose asleep again and lets in Murphy in behind, but Lloris bails him out this time. Not confident at all of a cleansheet. #FPL

#THFC have looked very comfortable, but Cardiff could have levelled.

Junior Hoilett outpaced Danny Rose and flicked the ball over Lloris. It was cleared off the line.

While the scoreline wasn't one that would delight Neil Warnock, his side certainly had chances in the game through their approach.

Callum Paterson was dangerous as a lone front man, winning his fair share of flick on's that the pace of Josh Murphy almost profited from had Toby Alderweireld not been alert to clear off the line. 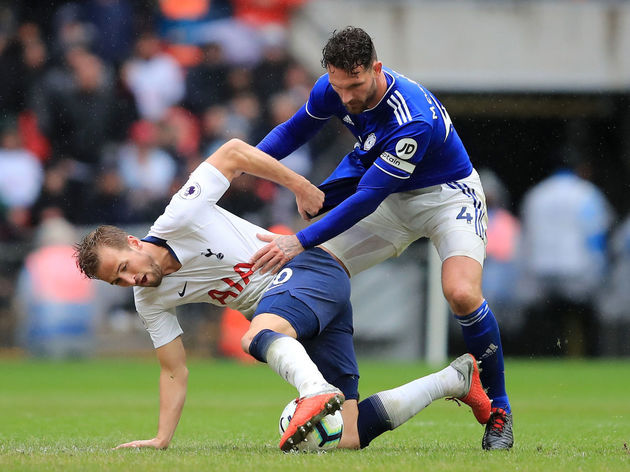 Although Cardiff are still in search of their first Premier League win of the season, they've perhaps stumbled across an approach that could at least give them a chance at survival.

Despite falling away somewhat in the second half, Josh Murphy caught the eye for Cardiff, making a number of good runs off the lone striker Callum Paterson.

His pace and inside runs caused Danny Rose a number of problems, and was denied a goal by some brilliant defending from Toby Alderwerield.

Have to say Josh Murphy has impressed me today. Been the shining light in what is basically a pub team. Quick, clever and deceptively strong. Streets ahead of his teammates. Would love to see him surrounded by quality players.

Thought @CardiffCityFC paid for a slow, too respectful start as Eric Dier pushed Tottenham ahead. But later the #Bluebirds created openings with the pace of Josh Murphy telling. Great goalline clearance by Alderweireld. @CardiffCityFC still in it. HT1-0

Not a right back by trade, Bruno Manga looked uncomfortable for large spells in the game, coming up against a tricky opponent in Son Heung-Min.

Cumbersome in possession and out of position too many times, it'll be a concern for Neil Warnock, while Joe Ralls' challenge also deserves a dishonourable mention.

Following the international break, Tottenham face the prospect of a London derby when they travel to the London Stadium to face West Ham.

For Cardiff, they host fellow promoted side Fulham as their search for their first league win of the season continues.