​If you haven't heard the news, in which case I feel really sorry for you, ​Steve Bruce was subject to an attempted cabbage missile before Tuesday night's clash between Aston Villa and Preston North End.

Of course, this unbelievable story was cast further into the limelight with Bruce's subsequent sacking. Was it the cabbage? Was that the last straw for the brand-conscious hierarchy at the Villans? Because it's not every day a vegetable is chucked at an established manager.

But it does happen more often than you think. Here are seven of the best recent uses of an unorthodox projectile at a football ground. Buckle up...and take cover.

Creative with veg. A fan took a cabbage to football and threw it at manager Steve Bruce. In the Belgian derby between KV Kortrijk - Zulte Waregem KVK fans usually throw leeks (and other vegetables) on the pitch to taunt ‘the farmers’ of Waregem. #avfc pic.twitter.com/Cj8Rs5Yrc8

This is not just a one-off. This not just one disgruntled weirdo with unrivalled abilities to inexplicably conceal large vegetables. This is an entire section of fans, and it's a regular occurrence.

Obviously, despite it's prominence, it's still hilarious - as this referee depicts. You'd think, after a while, the laughing would fade, and all that's left is a load of leeks obstructing a game of football. But no, apparently not. Not in Waregem, anyhow. Great stuff.

Charlton vs Coventry interrupted as fans throw thousands of toy PIGS on the pitch in joint protest https://t.co/ldGQL8XLeM pic.twitter.com/j3ynxmbVLq

A classic. This was not only hilarious and disruptive, it was also constructive - as fans of Charlton and Coventry momentarily put animosity to the side to join forces in protesting against their calamitous owners.

Thousands of tiny toy pigs - to show "GREED", clever eh? - showered down on the Valley Stadium, comfortably outnumbering the amount of people that had come to 'enjoy' the proceedings. Unfortunately, both ownership groups are still firmly in place, but still, what more can you do?

Football fan in Argentina throws his FALSE TEETH at his manager! Erm, what!?!?! http://t.co/KKwidP13t1

Vacating from the coordinated fan attacks, we're back with the daring lone rangers, and this vigilante from Argentina is up there with the best.

Not blessed with same covert concealment talents of our Cabbage man in Birmingham, this elderly Argentinos Juniors fan took matters into his own hands when his team were plummeting towards relegation from the Superliga. What he put in his hands were his dentures.

Disparagingly, he missed his target in the dugout, and failed in lifting his spirits - he was moaning for the rest of the game. Back to the organised events, this time we travel to Germany. ​Borussia Dortmund fans were fed up with rising ticket prices, so...tennis balls, obviously.

While the correlation may seem tenuous, this was actually very witty in German. In Deutschland, 'great tennis' is used as as an expression for something excellent. So by throwing tennis balls, supporters made it abundantly clear that the situation wasn't 'great'. Get it.

Back to Argentina once more. Rosario Central fans were definitely treading the line between funny and utterly creepy here, more on the side of the former in this instance.

Contrary to previous instances, where the mass projectiles have been used in protest, this was actually smug celebration. The Rabble, as they're appropriately known, had just won the league and, welcoming their arch rivals Newell's Old Boys (yes, that's an Argentinian team), they came armed with commemorative babies dressed in their opponents shirts. Genius. The OG pig incident. It was Luis Figo's second return to the Nou Camp after his acrimonious world record move from ​Barcelona to ​Real Madrid. His first visit was so fiery, he refused to take up his corner duty.

A year later, the same excuse couldn't fly. Figo was taking corners, and the Barça fans were ready. With a consistent deluge of bottles and coins raining down whenever the Portuguese international strode to the corner flag, Figo thought he'd seen it all. Then, in the 72nd minute, amongst the showering was a dismembered pig's head. Now that's how you send a message.

Even better, the bloodied item was even preserved for use in an exhibition in Germany entitled 'Cult Scene Stadium'. Very edgy. 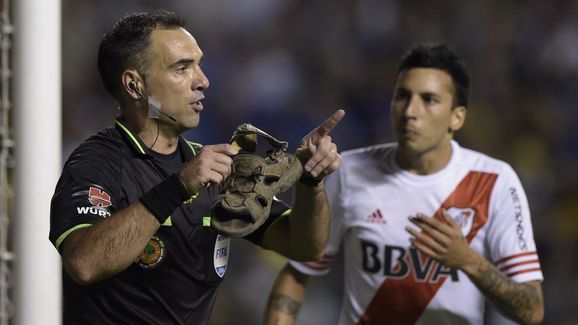 What do you know, we're back in Argentina. Because, if we've learnt one thing today, it's that the Argentinians love to express their emotions through throwing inanimate objects. In this case, it was the Sudamericana Cup semi final between Superclasico rivals River Plate and Boca Juniors.

The object in question? A sandal. Just the one, hurled onto the pitch from a fair distance with venomous intent. Luckily, no one was struck - but play was stopped, and the referee was forced to remove it. So, we all know who won: the guy with one shoe. He's still winning to this day.