​Bayern Munich are back in Champions League action when they host Ajax in their second group Group E match on Tuesday evening.

Nico Kovac suffered his first defeat as the manager of Bayern on Saturday as his side were defeated 2-0 by Hertha Berlin in the Bundesliga. He'll be hoping that the result was simply a blip and that he can make it two wins from two in the Champions League after brushing aside Benfica 2-0 in their last match. Their opponents, Ajax, are coming off the back of a comfortable 2-0 win over Fortuna Sittard in the Eredivisie and are currently sitting in second place in the league. They also got off to a winning start in their opening Champions League match, cruising to a 3-0 victory over AEK Athens.

Here's everything you need to know ahead of this one.

It's been 14 years since these two heavyweights of European football have faced off against one another and their last encounter proved to be a cracker.

​Bayern had already qualified for the knockout stages prior to the match, but Ajax needed at least a point to finish in third place to confirm their place in the UEFA Cup. 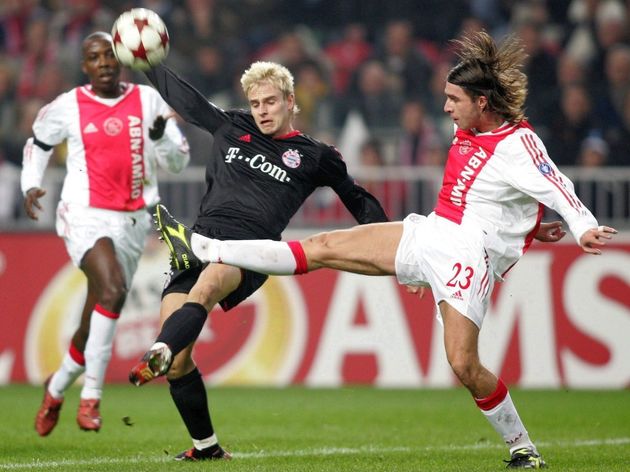 Dutch striker Roy Makaay put Bayern ahead early on to dent Ajax's ambitions, but goals from Tomas Galasek and Nicolae Mitea either side of half time turned the match on its head.

Michael Ballack found a late equaliser for Bayern to make it 2-2, with the point proving enough for Ajax to qualify for the UEFA Cup ahead of Maccabi Tel Aviv on goal difference.

After a disappointing World Cup with Poland, Robert Lewandowski has been back to his lethal best so far this season.

The striker has scored eight goals from eight appearances in all competitions, proving that he is still one of the best number nines in world football. He'll be coming up against former Manchester United man Daley Blind, who rejoined Ajax this summer after a four year spell with the Red Devils.

He's a versatile defender who can operate pretty much anywhere along a back line, but he's currently being utilised as a centre-back for Ajax. Bayern's game plan may focus on isolating Blind so that Lewandowski can take advantage of his superior height and strength.

Bayern have a handful of first team regulars who will miss this one through injury, including Kinglsey Coman, Leon Goretzka, Rafinha and Corentin Tolisso.

Mats Hummels and ​Thomas Muller didn't start against Hertha Berlin on the weekend either, but they may come back into the starting XI on Tuesday. Ajax will be without star turn Frenkie de Jong, after he picked up a calf injury against Fortuna Sittard at the weekend.

Bayern were off the pace against Hertha at the weekend, but they are still the overwhelming favourites for this one.

Nico Kovac will want his side to qualify as quickly and as efficiently as possible from Group E and he will be emphasising the importance of maintaining a 100% home record to all of his players. Ajax have very little to lose and they will know that they are realistically competing with Benfica and AEK Athens for second place behind Bayern.

It won't be easy for the German champions, but they should have more than enough to secure all three points.