It is the fourth time in the last five seasons that United have exited the competition at the hands of lower league opposition after recent defeats against MK Dons, Middlesbrough, Bristol City and now Derby, with only a stoppage time Marouane Fellaini equaliser forcing the shootout. ​United had taken an early lead with a marvellous ​Juan Mata goal, but a truly stunning Harry Wilson free kick and a late go-ahead goal from Jack Marriott left Jose Mourinho's side - down to ten men after the dismissal of goalkeeper Sergio Romero - facing elimination.

Phil Jones missed the decisive effort from 12 yards after a masterful shootout from both sides.

.@SCarsonOfficial SAVES FROM PHIL JONES!!! THE RAMS ARE THROUGH!!!

Cup holders Manchester City named a rotated side but had little trouble against League One's Oxford United. Gabriel Jesus gave the Premier League champions a first half lead, with late strikes from ​Riyad Mahrez and teenager ​Phil Foden wrapping up the result. Oxford, meanwhile, failed to register more than a single shot off-target in the entire game.

There were upsets as third tier Blackpool piled misery on QPR manager Steve McClaren with a 2-0 win at Bloomfield Road, and Championship side Burton Albion claimed the scalp of top flight Burnley courtesy of a second half comeback to win 2-1 at the Pirelli Stadium.

The Seasiders book a place in the fourth round of the @Carabao_Cup for the first time since 2007. pic.twitter.com/gFqpslOloR

No goals could separate Premier League pair Leicester and Wolves in 90 minutes, requiring penalties to find a winner. Foxes goalkeeper Danny Ward emerged as the hero after saving two Wolves spot-kicks to help his side win 3-1 in the shootout.

Bournemouth overcame Blackburn Rovers in a five-goal thriller, with ​Callum Wilson grabbing a dramatic late 94th minute winner in the 3-2 victory after Rovers had initially managed to erase a two-goal Cherries lead earlier in the second half. Fulham prevailed against Millwall after their trip across London from west to east, emerging 3-1 winners thanks to goals from Joe Bryan, Luca de la Torre and Cyrus Christie. Cottagers boss Slavisa Jokanovic even handed a senior debut to 15-year-old Harvey Elliott.

Crystal Palace also beat Championship opposition after two goals from Andros Townsend and one from Patrick van Aanholt saw them comfortably triumph over West Bromwich Albion on the road.

Full time. A great performance from the Eagles!

Middlesbrough needed a penalty shootout to win an all-Championship tie against Preston.

Twice, Preston took the lead and twice that lead was cancelled out as the game finished 2-2. Graham Burke was then the guilty party who missed the decisive kick as Boro won 4-3.

A Jordan Rhodes hat trick was enough for Norwich to beat Wycombe Wanderers of League One away from home, although the Canaries let a 4-1 lead slip to a 4-3 win in the end. 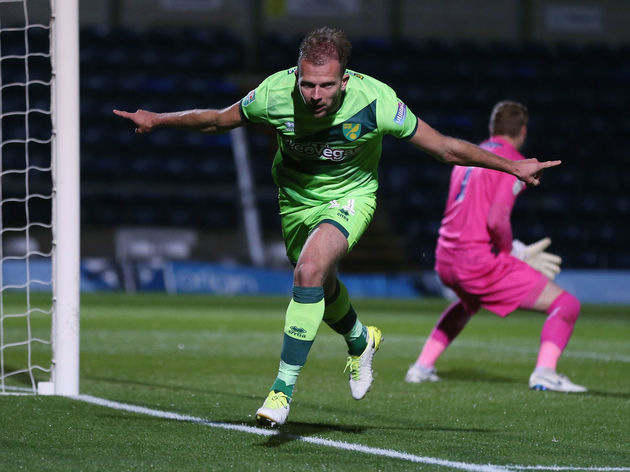 The Carabao Cup third round continues on Wednesday night, with Arsenal, ​Liverpool, Chelsea, Tottenham and West Ham all in action.