Manchester United were booted out of the Carabao Cup by Derby County on penalties, following an exhilarating 2-2 draw on Tuesday evening.

United got off to the perfect start, taking the lead with just three minutes on the clock when Juan Mata finished off a swift counter attack with a masterful finish into the bottom corner.

Despite having a handful of promising chances, United couldn't double their lead in the opening 45 minutes and went into the break with a slender 1-0 advantage. 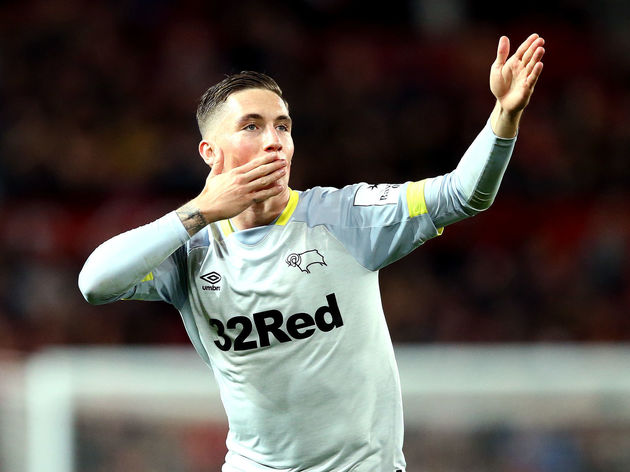 The second half started slowly before ​Liverpool loanee Harry Wilson fired home an unbelievable 30-yard free kick which wrong footed Sergio Romero in the United goal. Things got a whole lot worse for Romero and United when the Argentinian keeper handled the ball outside his box and was given a straight red card.

Carson proved to be the hero for Derby, saving Phil Jones' penalty to send the Championship side into the fourth round of the Carabao Cup.

After Paul Pogba's comments about ​Manchester United's conservative approach against Wolves on Saturday, it was crucial that the Red Devils upped the tempo against their Championship opponents. 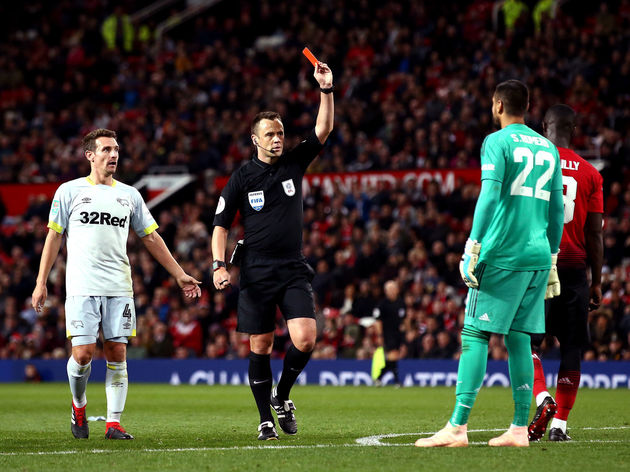 Their early goal provided a lot of hope for supporters, but once again there was something lacking from the performance. Their passing was slow, their attacks were often disjointed and too many players put in sub-par performances.

Pressure is bound to start building on Jose Mourinho after a performance like that.

Star Man - On a night full of disappointing performances, ​Anthony Martial stood above the rest of his teammates, particularly in the first half.

He looked as though he was out to prove a point and once he got into his full stride it was very difficult for Jayden Bogle to stop him. The Frenchman will be hoping that he has done enough to earn himself some more first team minutes going forward.

Martial done more in 3 minutes than Sanchez in 5 weeks. Imagine my shock

Martial showing why at City, Liverpool or Chelsea he'd be top class

Worst Player - There were plenty of candidates for this one, but ​Romelu Lukaku had an absolute stinker up top for United.

The Belgian striker missed chance after chance and those squandered opportunities ended up costing the Red Devils more than any of the mistakes they made at the back.

That's unfortunately endemic of Lukaku. He should be in double-figures this season. Missed more than he has scored. #mufc

Frank Lampard can take serious pride in how his ​Derby County side approached this one and they fully deserved the victory. The Rams could have easily dropped back and soaked up as much pressure as possible, but they instead decided to take the game to the hosts right from the off. All the headlines will be about United's dreadful performance, but Derby's showing deserves plenty of plaudits.

Promotion to the Premier League has to be the aim for Derby this season.

Star Man - Picking one individual that stood above the rest is virtually impossible on account of how well Derby worked as a team.

Having said that, young Harry Wilson's performance indicates that he has an incredibly bright future ahead of him. His decision making in the final third does need a little refining, but he clearly posses the sort of raw talent that will see him forge a very decent career when he returns to Liverpool.

Worst Player - No one had a bad game from a Derby perspective, but the most ineffective player in their forward line was Mason Bennett.

He missed a golden chance in the first half to put his side and found himself drifting in and out of the game there after.

Manchester United will have to put that result behind them as they travel to West Ham on Saturday afternoon.

Meanwhile, Derby return to Championship action with an away trip to Bolton Wanderers.