It's award season in the global football calendar where the honour of top player in the world is bestowed upon one elite individual. Except there isn't just a single award for that, there are two entirely separate gongs to rival each other.

Here's everything you need to know about the two awards... Given that its long 62-year history, the Ballon d'Or is generally seen as the classier and arguably more prestigious of the two compared to its more shouty, glitzy and generally over the top distant cousin brought into the world by FIFA.

Presided over by esteemed football publication France Football, the Ballon d'Or - the iconic golden ball trophy - was first awarded back in 1956 and was originally conceived as the European Football of the Year award.

Blackpool and England winger Stanley Matthews was the maiden recipient, beating European Cup winning duo Alfredo di Stefano and Raymond Kopa of Real Madrid, both of whom would go on to win the honour themselves in the years that followed. Famously, the likes of Pele and Diego Maradona were ineligible. But in 1995 the award was opened to non-European players and became global for the first time. That year it was won by Liberian forward George Weah, perhaps more for symbolic reasons than on merit given his generally modest achievements during the 12 months in question.

The Ballon d'Or existed independently until 2009, after which it merged with FIFA's own World Player of the Year award that the governing body had been running annually since 1991.

From 2010 there was one undisputed global award, the 'FIFA Ballon d'Or'.

The Ballon d'Or trophy and name was retained, but it moved from being a relatively low-key December presentation to the main event at FIFA's annual January Gala. And rather than being voted for solely by select journalists, it adopted the FIFA system, counting votes from the coach, captain and a designated journalist from every member association around the world. 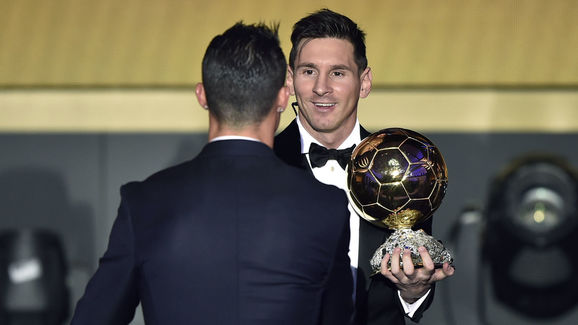 The FIFA Ballon d'Or years coincided with the Cristiano Ronaldo/Lionel Messi duopoly. Each had won one independent Ballon d'Or and one FIFA World Player of the Year in 2008 and 2009 respectively, with no one else even getting a look in thereafter.

After six years together, the Ballon d'Or and FIFA officially parted ways, with the former returning to the control of France Football. FIFA, left without an annual award to present, subsequently came up with he Best FIFA Football Awards, a more all encompassing version of their previous endeavour, but its centrepiece remains the Best FIFA Men's Player.

And so, here we are again, with two entirely separate global football awards.

The 2016 Ballon d'Or went back to being handed out in December like it always had been and FIFA held their 2016 gala in January 2017, as normal, to reflect on the previous year.

Who will be crowned #TheBest? 樂#FIFAFootballAwards

But FIFA created the 'Best' awards to be number one and not wanting to be overshadowed by the Ballon d'Or, the 2017 FIFA gala was brought forward by three months to October to trump France Football and steal the limelight from the Ballon d'Or. It is now being held even earlier in 2018, on 24th September, with the Ballon d'Or announcement to follow in December.

People now often confuse the two, referring to the Ballon d'Or when they mean Best FIFA and vice versa. Some news reports in the week of the FIFA BEST ceremony have mistakenly focused on the Ballon d'Or even though that isn't the immediately topical subject.