Liverpool made it six wins from six in the Premier League as a dominant first half showing was enough to beat a limp Southampton side 3-0 at Anfield.

A Wesley Hoedt own goal opened the scoring after ten minutes before a Joel Matip header and a Mohamed Salah tap in on the stroke of half-time killed off the game for Jurgen Klopp's side, who were rarely troubled by their south coast opponents. Check out the breakdown of the game below.

While the Reds have made a fabulous start to the season, it has been largely down to the same personal, so the fact that two players making their first starts of the season in Shaqiri and Matip influenced the game so greatly would've delighted Jurgen Klopp.

Shaqiri had a hand in the first and third goal for Liverpool and caused problems for the Saints throughout, while Matip's header midway through the first half gave Liverpool the two goal cushion to play the exciting brand of football that fans have come to expect. With the games set to come thick and fast, Klopp will now have the confidence to rotate more often following the efforts of the players he instated into the side, showing that Liverpool have the strength in depth to compete this season.

STAR MAN - It was only a 45 minute display from Shaqiri on his first competitive start for Liverpool, but the Swiss international certainly showed the fans, and Klopp, what he was capable of.

Operating in a central position, the former Stoke man linked up well with the usual front three of ​Salah, ​Firmino and ​Mane, while having a hand in both the first and third goals of the game. His shot after ten minutes was turned into his own net by Wesley Hoedt, before his free kick unluckily crashed against the crossbar, giving Salah a tap in on the stroke of half time.

Brought off at the interval, Shaqiri certainly made the most of his opportunity, as he will hope it'll be the first of many starts for the club as the fixtures begin to pile up.

Shaqiri with two assists, Virgil imperious, Matip’s first Anfield goal, Mo back on the scoresheet - good first half that. Andy Robbo missing the protection Milner gives him but 3-0 is 3-0. Up the Reds #LFC #LIVSOU

What a free kick by Shaqiri 

Shaq could be are new Coutinho he has been nothing but incredible that first half.

Xherdan Shaqiri, for £13-million, with those massive calves, that do all these magical things on a football pitch.

WORST PLAYER - Considering the manner of Liverpool's win, it's difficult to pick out a poor performer, although Andrew Robertson didn't quite hit the heights fans have come to expect.

While Trent Alexander-Arnold provided the assist for the second of the game, the Scot wasn't at his usual marauding best down the left hand side, but to say he had a bad game would be wide of the mark.

With top scorer Danny Ings ineligible to play against his parent club, it was always going to be a tough task for ​Southampton to get anything from the game, although Mark Hughes' side didn't help themselves.

Shaqiri was afforded far too much space to shoot seconds before Hoedt's own goal, while Vestergaard was simply out-jumped by Matip for the second, before a free kick gave ​Liverpool their third, wrapping up the game before half-time. 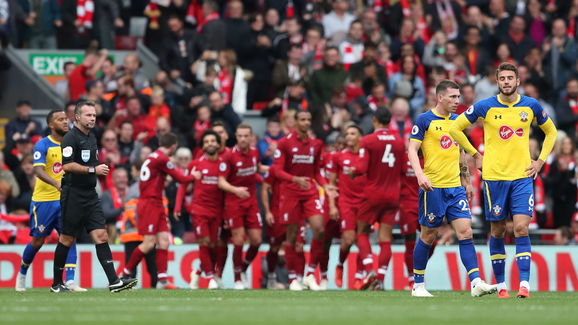 The Saints were toothless in attack, but it was their defending that left a lot to be desired, leaving too much space for attackers to take advantage of, meaning Liverpool didn't break sweat in order to win the game.

STAR MAN - In what was a difficult game for Southampton, Matt Targett was the best of the bad bunch, and was perhaps unlucky to be substituted ten minutes after the restart.

Playing almost as a winger down the left, the England Under-21 international looked good in parts, offering width and aimed to get forward at every available opportunity, although those times were unfortunately few and far between.

WORST PLAYER - Although his central defensive partner conceded the own goal to start the scoring at Anfield and pushed him close for this unwanted tag, Jannik Vestergaard endured a torrid time against Liverpool.

The Dane was comfortably beaten by Matip in an aerial challenge for the Reds' second of the game after just 20 minutes, although the summer signing's biggest problems came with the movement of the home side's front three, as Salah especially had plenty of joy running off the back of him to give him a tough afternoon.

Men against boys. Shambles. Hoedt and vestergaard are garbage. Get Yoshida back in #saintsfc

Salah centrally has been fun. His bullish runs have given the three other attackers space, even against two big CBs Hoedt and Vestergaard.

Liverpool will be looking to extend their perfect start to the season as they prepare for a double header against Chelsea next week in both the Carabao Cup and Premier League respectively.

Southampton meanwhile will be hoping to put this drab display behind them when they travel to face Wolves next weekend, before facing the blue half of Merseyside in Everton days later in their own Carabao Cup tie.