​Sergej Milinkovic-Savic, a rumoured target for Manchester United and Tottenham, is expected to renew his commitment to Lazio with a contract extension in the coming days.

The Serbian midfielder became one of Europe's most sought-after young midfielders with his performances last season, scoring 12 goals in 35 Serie A appearances as Lazio narrowly missed out on qualifying for the Champions League.

Despite reports linking United, Spurs and Juventus with a move for the 23-year-old, he stayed in Rome and is now set to extend his contract beyond its current 2022 expiration date, according to Lazio's sporting director Igli Tare.

"It's just a matter of days now," Tare told ​Sky Sports Italia. "All will be signed at the start of next week. The agreements have been in place for some time now."

Despite missing out on a top four spot to closest rivals Inter on the final day of last season, Lazio were in a strong position when it came to warding off interest in Milinkovic-Savic, due to his contract still having four years left to run.

They slapped a €100m (£89m) price tag on the Serbian, which nobody was willing to match. 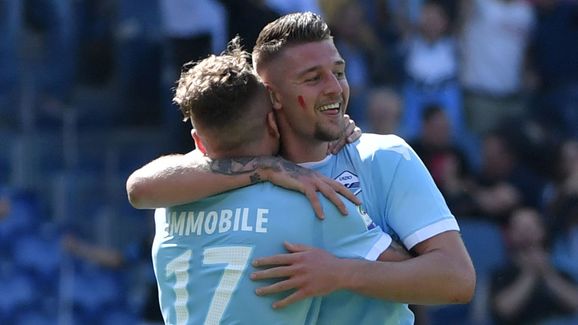 Lazio's star striker and last season's joint top scorer in Serie A Ciro Immobile is also close to agreeing a new contract at the Stadio Olimpico.

Immobile scored his 69th goal in 93 appearances for Lazio as they got their Europa League campaign off to a winning start with a 2-1 victory over Apollon Limassol on Thursday evening.