De Jong has earned many plaudits since breaking onto the scene last season, with Ajax ultimately resisting the temptation to immediately cash in on the 21-year-old over the summer. According to a claim from The Sun, United had scouts watch De Jong in action at international level when the Netherlands played France in the UEFA Nations League a fortnight ago.

"The club decided to take a look at him as they have been getting rave reviews from elsewhere. Jose and the staff like the look of him. He can play in a few different roles and he looks comfortable wherever, which is a big plus," a source told the tabloid newspaper.

"The scouts were already sure he is the real deal but his display against France only intensified that belief even further. He is a top class talent and it is clear to see why so many of the big teams in the Premier League and around Europe want him."

Mourinho is said to be a 'huge admirer' and United have been tipped to make an approach when the transfer window re-opens in January. A positive relationship with Ajax chief executive Edwin van der Sar and selling Daley Blind over summer could help grease the wheels.

A creative midfielder, De Jong has drawn comparisons with Dutch maestro Wesley Sneijder, a player heavily linked with United in the latter years of Sir Alex Ferguson's reign and one who enjoyed great success working under Mourinho at Inter, winning the treble in 2010.

Having been called up to the Dutch national team squad alongside 34-year-old Sneijder, De Jong insisted the veteran still remains superior for now. 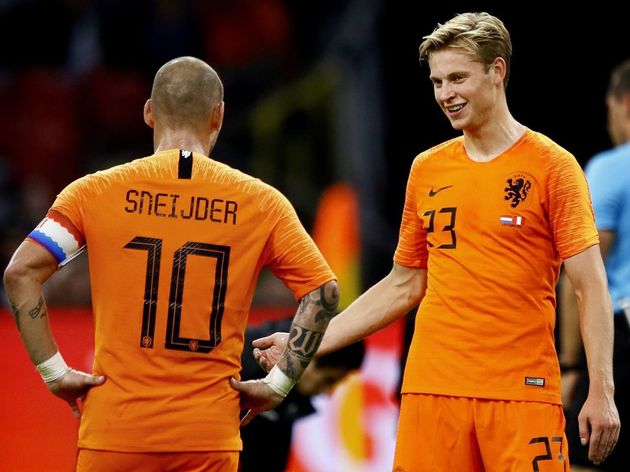 "Wesley is a much better player than me, incomparable also in terms of playing style and everything that he can do," De Jong told De Telegraaf earlier this month.