​Jamie Vardy is set to announce his retirement from international football after holding talks with England manager Gareth Southgate.

The ​Leicester City striker turns 32 in January and his age is one of several factors which have convinced him to call time on his career with the Three Lions after 26 caps.

A desire to spend more time with his family, and concerns about the lack of game time he will get for England, are also chief among his reasons.

He is only 31 years-old, surely he would've been apart of England's Euro 2020 squad...樂 pic.twitter.com/asencApK1g

"To be honest with you, this has been on my mind for a while," Vardy told ​the Guardian.

"I’m not getting any younger and you can see, to be fair to the gaffer, he wants to make it more youthful, which obviously had its benefits during the World Cup – we got to the semi-finals and finished fourth, which is equal to the furthest we have ever been on foreign soil.

"So I just said to Gareth that I think it’s probably best from now on, especially with the way he wants to go, to bring youngsters in who he thinks have got the ability and start nurturing them into international football." 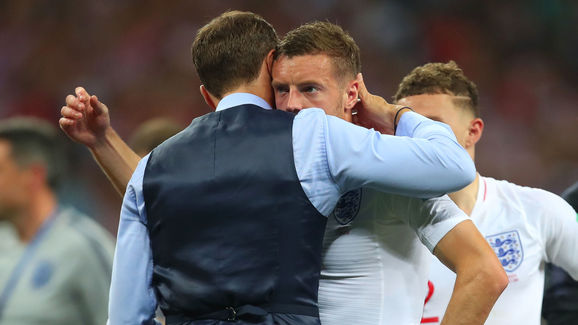 Vardy was part of Southgate's squad at the 2018 World Cup but only made one start - in the dead rubber group game against Belgium. He played the last eight minutes of the semi final defeat to Croatia.

He was first called up in 2015 by then-manager Roy Hodgson, as a reward for his impressive ​Premier League form for Leicester.

He went on to score seven times in 26 appearances, including an equaliser against Wales at Euro 2016 and goals in friendlies against European powerhouses Germany, Netherlands, Spain and Italy.