W90
WorldNews
Lists
Next Article
Antonio Conte: I want to watch Newcastle vs Arsenal so I can suffer

Arsenal have announced that highly rated youngster Emile Smith Rowe has signed a new 'long-term' contract with the club, tying him to the Gunners for the foreseeable future.

Smith Rowe, who was a member of England's U-17 World Cup-winning squad last year, has been part of the Gunners' senior setup this summer during pre-season in Singapore.

He scored a memorable solo goal in a 1-1 draw against Atletico Madrid, while also providing an assist for Alexandre Lacazette to score in the subsequent 5-1 thrashing of Paris Saint-Germain.

The Croydon-born teenager, who is yet to make his competitive first team debut but moved up to U-23 level at the age of just 16, was over the moon to score his first goal.

"It's just a dream come true. I still can't believe it has happened," he was quoted as saying by the Daily Mirror following the Atletico game. "I came on tour thinking I wanted to impress the manager and do as well as I can. But to get a goal like that is so surreal. It's crazy. I can't really explain it - my head's all over the place.

"I only found out the day before the squad left that I was coming with them. We had a training session on the Saturday and the kit man came up to me straight after and said, 'Here's your suitcase, you're travelling.'"

This coming season, Smith Rowe just wants to be involved in the first team as much as possible under new manager Unai Emery, with the ultimate goal of making his Premier League bow. 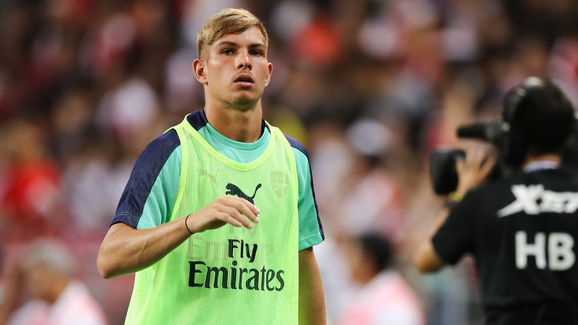 "My long-term goal is to get in the first team permanently but this season it's to try to gets many minutes as I can in the Europa League and cups, and hopefully make my Premier League debut," he said.