​Burnley goalkeeper Nick Pope suffered what looks like it could be a 'serious' shoulder injury during the club's Europa League clash against Aberdeen, manager Sean Dyche has revealed.

Pope, whose performances last season were a huge reason why Burnley made it into Europe for the first time in 51 years, was forced off just 14 minutes into the first leg of the tie after a collision with Aberdeen forward Sam Cosgrove. 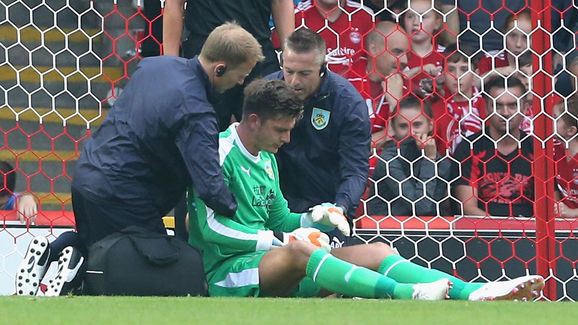 "We are waiting to find out more news. Nick has gone to hospital with an injury to his shoulder and it certainly looks more serious than not serious at this stage, so we are really disappointed in that," Dyche told the club's official website after the game.

"It was a bit of a needless challenge when Nick looked like he was just going to catch it, and then (after the ball lands) I think it's the second challenge," the manager added.

"When he responds to stop the ball going in I think the lad has caught his arm and knocked it back, so we'll just have to wait and see." It was a shoulder injury to usual starter Tom Heaton that presented Pope with his chance at the start of last season. He grabbed the opportunity with both hands and ultimately finished the campaign by earning a place in England's World Cup squad.

Heaton has since recovered from his long-term layoff but a calf complaint is currently keeping him out of action. It meant that Anders Lindegaard was the man who replaced Pope, with Adam Legzdins the only other goalkeeper in the first team squad.

A late goal from Burnley forward Sam Vokes cancelled out a first half penalty from Aberdeen's Gary Mackay-Steven to end the first leg 1-1. The Clarets hold the slender advantage of an away goal ahead of the return game at Turf Moor next week.

The winners of the tie will face Turkish side Istanbul Basakehir in the third qualifying round.