It was the turning point of that game for France, who would eventually go on to lift the trophy for the second time. After taking the lead through a penalty, Les Bleus conceded a quick double either side of halftime.

Those nine minutes were the only time France were behind in a game at this World Cup and it was Pavard who put his side back on level terms.

A long cross from fellow full-back Lucas Hernandez looked to be overhit, sailing over the men in the middle and bouncing beyond the approaching Kylian Mbappé

But Pavard had other ideas, meeting the ball on the edge of the 18-yard box and firing a venomous volley past the stranded Franco Armani. Mbappé added a brace in the 11 minutes that followed as Les Bleus cruised past Argentina on route to the final.

Of the 169 goals scored at the 2018 World Cup, FIFA compiled a shortlist including Juan Quintero’s low free-kick against Japan and Luka Modric’s long-range effort which also came against Argentina. 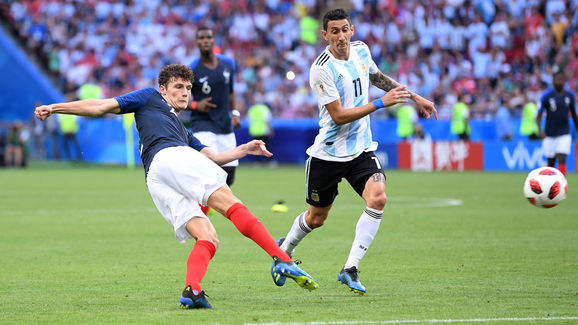 The selection was put to an online poll with over 3 million people voting, eventually handing the award the 22-year-old Frenchman.

FIFA recently announced the results via their official site, including quotes from Pavard following that victory.

"I just tried to get over it and keep it down, I was trying to hit it in the direction it came from, which is what the strikers always tell me. I didn’t think it over, and when it went in I just felt so happy.” Pavard said. The VfB Stuttgart full-back has shot to fame since his impressive performances at the World Cup. ​Bayern Munichare one the clubs believed to be interested in signing the Frenchman, and have been heavily linked with a move this summer.