But a solo debut goal against ​Liverpool a couple of weeks later and a fine debut season in which he scored 17 times in a United side that was otherwise horribly lacklustre silenced the critics.

'£50m down the drain, Tony Marshall scores again' goes the popular Old Trafford chant that fans sing to poke fun at those who were convinced the young Frenchman would be a huge flop. 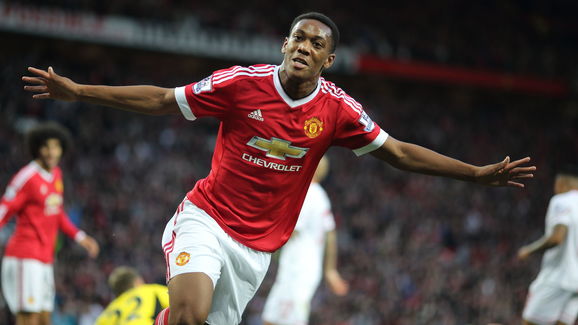 Even after a poor second season that began with being forced to change squad numbers to make way for Zlatan Ibrahimovic and was ultimately very stop-start as he struggled to impress Jose Mourinho, Martial started the 2017/18 campaign very brightly.

Usually sharing duties with Marcus Rashford on the left wing, he had scored eight goals in all competitions by the end of November and looked as lively as he had done during that first year when Louis van Gaal threw him in at the deep end.

When Alexis Sanchez arrived in January, Martial found chances in his favoured position harder to come by. His confidence dropped and, after a run of three goals in three ​Premier League games in the fortnight immediately prior to the Chilean landing, he didn't score again all season. United needed an explosive game changer like Sanchez, but what made Martial's move to the periphery more disappointing is that the former Arsenal star failed to reach that level in his first few months at Old Trafford, and is now relying on pre-season to help him find his Gunners form.

The adverse impact on Martial continued and it didn't seem as though he was getting any help from a manager, who rather than encouraging his players with a metaphorical carrot, prefers to just beat them with the stick instead. That approach works for some individuals, but many of United's most talented players - Paul Pogba, Luke Shaw and Martial - have not taken to it.

What we are left with is the situation whereby Martial has grown fed up to the point of wanting to leave. He apparently refused the offer of a new contract in April, while agent Philippe Lamboley told French broadcaster RMC just last month that his client wants to leave.

A song for Martial #mufc pic.twitter.com/GvtTa8ZQrK

Even though United still retain the option of extending Martial's contract by 12 months to 2020, the issue of his future has to be addressed soon. Mourinho has declared that the player will not simply get his own way, yet it has also been rumoured that the United boss wants to sell.

The logic is that he doesn't want an 'unhappy' player in the dressing room, while he can use it as an opportunity to bring in someone who does buy into his style of hard line management. It matters little to Mourinho that the reason the player is 'unhappy' is because of him.

It has been said that United are asking for £80m for Martial, while other ongoing gossip suggests that the club is 'willing' to spend £70m to reunite Mourinho with Chelsea winger Willian, the type of seasoned workhorse that the Portuguese knows he can hammer hard to get results. The idea that United could trade in a 22-year-old still widely recognised as one of the most innately talented young players in the world for another almost 30-year-old who may at most provide one or two seasons of worthwhile contributions is stomach churning.

What's worse is that because Mourinho has proven he is open to doing business with Premier League rivals - bringing Nemanja Matic and Sanchez to United, letting Henrikh Mkhitaryan join ​Arsenal and sanctioning Juan Mata's move to United back when he was ​Chelsea manager - there is a plausible chance that Martial could actually end up at Chelsea.

Should Willian move to United, ask yourself, who wins that scenario? It's not even close.

There was always a danger when United hired Mourinho in 2016 that he was out for short-term success, as he has been throughout his career. There were initial arguments that this time it would be different, that he is ready to build something more. It's now increasingly clear that isn't the case and that a short-term approach will now once again trump any longer term objectives. Mourinho has enjoyed incredible success throughout his career, but he seems incapable of adapting his style to the specific challenges in front of him. That is coming home to roost at Old Trafford and if he gets rid of a young superstar in the making like Martial for yet more short-term gain, the time has come to say ​#MourinhoOut.