Expert Opinion: 90min Writers Pick Their Team of the Tournament From the 2018 FIFA World Cup

A word for Takashi Inui, too. The newly-signed Real Betis winger has been a cult hero in La Liga with Eibar of late, and few players in the entire tournament had more of an individual impact on their team's performance. If it hadn't been for a spectacular late implosion against Belgium, he'd have put Japan into the quarter-finals, and he'd be getting the recognition he deserves. Andy - Natural winger Diego Laxalt shone out of position for an impressive Uruguay (despite his hair), defences were at least periodically terrified of Harry Maguire, while Denis Cheryshev became the poster boy for the host's surprise run.

Sime Vrsaljko edges out Kieran Trippier, after the semi final. The rest more or less picks itself, although wouldn't argue too much against anyone who has Ivan Perisic and Ante Rebic in their selection.

Jamie - This World Cup was as much about surprise breakout performers as it was about household names living up to their billing. Paul Pogba, Harry Kane and Romelu Lukaku finally did the business at an international tournament, but to see the likes of Kieran Trippier, Domagoj Vida and Lucas Hernandez shining was refreshing.

Jack - It was hard for me to choose two English players, but I had to. Kieran Trippier was one of the tournament's surprise stars, and while Harry Kane has been lambasted for only scoring penalties and stealing his teammate's goals, he did win the Golden Boot. That does count for something. Jude - It’s a shame Luka Modric couldn’t drag Croatia to a historic World Cup win, but France are extremely worthy winners this year. Mbappe has turned into a genuine world beater in the space of a tournament, and my boys Trippier and Kane showed the world just how good they are.

Wilf - For me, Varane has been the tournament's most consistent player, and the rest of the defence have surged from relative global ambiguity to genuine stars. 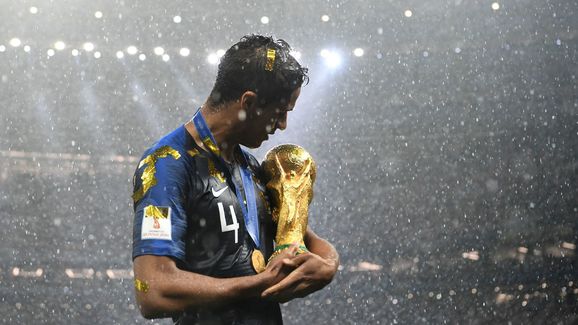 While Kante was fantastic throughout, Pogba and Modric's performances represented the pinnacle of creative influence on the biggest stage. As for Cavani, when adorned in his country's colours, he's the best striker in the world. No words needed for Sir Gaz.

Richie - Pickford, Mbappé, Pavard in there for their 'coming of age' breakthrough tournaments. Modrić and Kanté for both maintaining their relentless style of play throughout the tournament.

Trippier was arguably England's best and most consistent performer, while Kane was ice cool when called upon to do the business - and the small matter of bringing home the Golden Boot. Gareth Southgate for proving all his doubters wrong, and for bringing English football out of the dark ages by putting the 'England DNA' philosophy into action. Kavan - The above players all performed brilliantly for their respective nations, especially the likes of Mbappe, Hazard and Modric, with the latter pair winning the tournament's Gold and Silver Balls. I'd go with Roberto Martinez as manager because he was very flexible, unafraid to chop and change, and formulated his tactics based on his players' strengths.

Will - All of the above (with the exception of Godin and Cheryshev) were instrumental in guiding their teams to the semi-finals or further, with Dalic the obvious choice for coach considering Croatia won two penalty shoot-outs and a full extra time against England on their way to the final.

Jo - Players who played a key role in guiding their nation to at least the semi-final deservedly hold the majority of positions, with Diego Godin and Philippe Coutinho notable inclusions after standing the tallest for their respective nation throughout their stay in Russia. The Croatian boss deserves to receive plaudits after defying the odds to guide his team through to the final after playing the maximum amount of minutes possible in each of their knockout rounds.

Toby - It was a standout tournament for Modrić who put to bed any lingering - and quite frankly ridiculous - rumours that have questioned his ability to control & lead proceedings on the big stage. Mbappé has truly come of age at this tournament and proved that he is the hottest young commodity in world football.

90min Consensus Team of the Tournament

*A quick note on Cheryshev's inclusion. Kylian Mbappe actually had more votes than him as a right-sided midfielder, but...well, he's in up front. I know that Cheryshev didn't play a single damn minute on the right. You know that too. Blame the writers who voted for him (and the ones who voted for the similarly not-bloody-right-sided Philippe Coutinho there, too).

If we were of a mood to change the formation based on the votes we've had in, it'd be a 4-3-3 with Courtois; Trippier, Varane, Godin, Lucas; Modric, Kante, Pogba; Mbappe, Lukaku, Hazard.