​France have won the ​2018 World Cup following a comprehensive victory over Croatia in Sunday's final in Moscow.

It was a day for records. Didier Deschamps has become only the third person in history to win the trophy as both a player and a manager, after Franz Beckenbauer and Mario Zagallo, while ​Kylian Mbappe became the first teenager since Pele to score in a World Cup final. But Les Bleus won't care a jot at the moment - as it's the second time they've managed to win the big one. 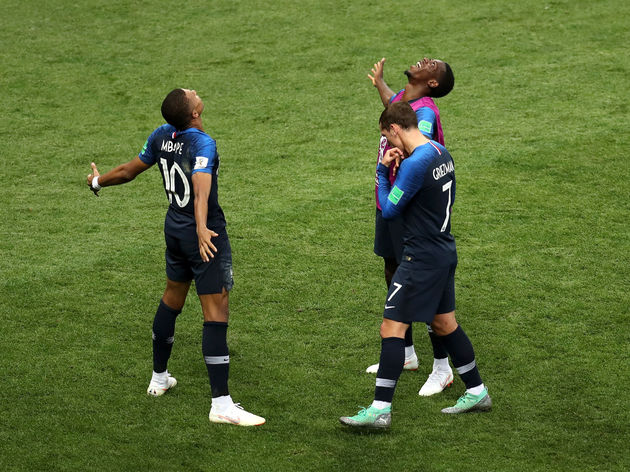 It was a stunning encounter that really did not disappoint. Croatia started the game on the front foot but ultimately fell behind through a Mario Mandzukic own goal. They did equalise, however, thanks to a thunderous strike from Ivan Perisic from the edge of the box.

History was made in the closing moments of the first half as Perisic was punished for handball - reviewed with the use of VAR - and Antoine Griezmann cooly tucked away a penalty to give France a 2-1 lead at half time. France moved out of sight after the break though, scoring twice in quick succession through Paul Pogba and Mbappe.

TFW you become the first teenager to score in a World Cup final since Pelé in 1958. #UCL #WorldCup pic.twitter.com/eCmaS4Ly3B

A terrible mistake from Hugo Lloris allowed Mandzukic to pull one back and make things interesting, but France held on to seal their second World

France kicked off their campaign with a 2-1 win over Australia and followed up with victory over Peru, before playing out a 0-0 draw with Denmark in what was widely labelled the worst game of the tournament.

Their victory over Argentina in the last 16 was the first time in the tournament where we saw the true prowess of Didier Deschamps' attack, but victories over Uruguay and Belgium in the last eight and last four respectively showed a true steel to the team over the course of the tournament. You can check out the ​match report, and a

But it's congratulations to France, who have sparked mass celebrations in Paris with a deserved victory to round off a fantastic tournament in Russia.