Celtic's promising left-back Kieran Tierney may still be playing Scottish football next season, as ​Everton are not willing to invest £25m on the young talent. Although Tierney has both Champions League experience and international caps with Scotland, according to The Scottish Sun,the Liverpool-based club feels that the player's price tag is excessive and are now looking elsewhere.

In a recent interview with the Daily Star, football recruitment consultant Ian McGarry - who has been following Scottish football for over 25 years - has revealed that he believes Everton should make an effort and meet Celtic's asking price (via Liverpool Echo). In case the Toffees keep faith in their decision not to spend £25m for the 21-year-old, McGarry said that Tierney would probably be happy to stay in Glasgowall the same.

"He loves Celtic, he's a Celtic supporter. I think the Celtic fans have engaged with him for that reason. We saw him with a loudhailer after the Scottish Cup Final singing with them. 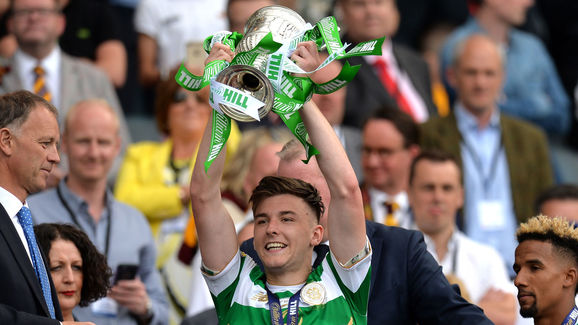 "I think ideally Kieran Tierney would want to stay at Celtic.

Meanwhile, Everton appear to have moved their attention to Spurs and England's Danny Rose, who is likely to leave ​Tottenham during the summer.