A late, late goal from Nacer Chadli secured Belgium's place in the last eight of the World Cup on Monday night, as the Red Devils came back from 2-0 down to beat Japan 3-2.

Goals from Haraguchi and Inui put Japan into a two-goal lead early in the second half, but an inspired Belgium comeback saw goals from Jan Vertonghen, Marouane Fellaini and Chadli turn the game on its head as Roberto Martinez's side ran out as winners.

Belgium made ten changes from their win against England as they saw the return of key men Romelu Lukaku, Eden Hazard, Dries Mertens and Kevin De Bruyne. Japan, on the other hand, made six changes as they reverted back to a 4-2-3-1 following their 1-0 defeat to Poland in their final group game.

10 - Belgium have made 10 changes to their starting line-up against Japan - the most in a World Cup match since Spain v Saudi Arabia in World Cup 2006 (11 changes for Spain). Refreshed.#BEL #JPN #BELJPN #WorldCup pic.twitter.com/fzSxXPa6L9

Japan started on the front foot, and they had the first opening when Shinji Kagawa's low drive went past the post and failed to trouble Thibaut Courtois, but it gave Belgium an early reminder that Akira Nishino's side were more than capable of providing a shock.

Despite early dominance, Japan started to drop deeper, and Belgium could've taken the lead after 25 minutes. A dangerous cross from Mertens found Lukaku, but the latter couldn't sort out his feet and the chance went begging. 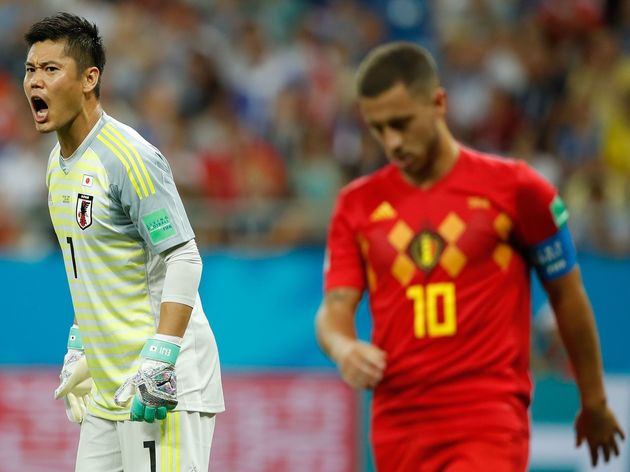 Just before half-time, Courtois almost cost his side. Nagatomo's cross ricocheted off Osako and the Belgian 'keeper comfortably collected the loose ball before almost dropping the ball into his own goal, but fortunately for Belgium, he was able to amend and spare his blushes.

The sides were level at 0-0 at the half-time interval. Japan caused Belgium a few scares, but the Red Devils were the side who looked the more likely to break the deadlock - though Japan's defence were so far faring well.

Less then three minutes into the second-half, Japan broke the deadlock. A well-executed counter-attack saw Haraguchi race through on goal where Vertonghen took an age to get back, and the 27-year-old tucked the ball into the bottom left corner to give Japan the lead.

Straight from the restart, Belgium almost restored parity. Mertens ran through the right channel and pulled the ball back into Hazard on the edge of the box, but the Chelsea man was unfortunate to see his strike cannon off the post. 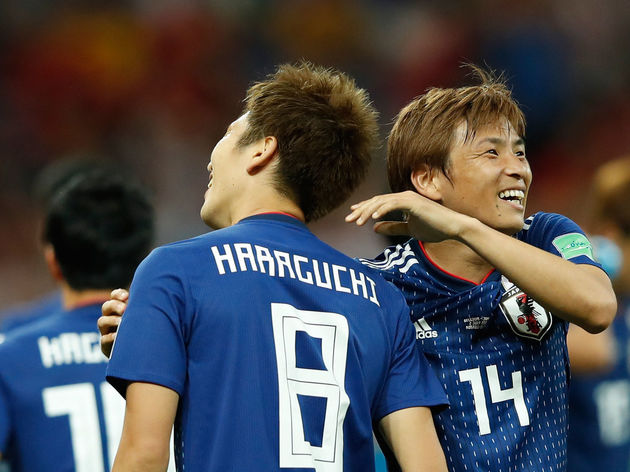 However, things quickly went south for Belgium when Japan doubled their lead courtesy of Takashi Inui. Kagawa laid the ball into Inui, and his long-range strike beat Courtois from 25 yards to give Japan a shock 2-0 lead.

Roberto Martinez and his side looked stunned, and Japan went on the hunt for a third goal to kill the game and progress to their first quarter-final. However, Belgium almost clawed one goal back when Hazard's delivery found Lukaku, but the latter should've done better as he could only head wide from close range and in turn miss Belgium's best chance of the game.

In an attempt to get his side back into the game, Martinez made a double substitution which saw Chadli and Fellaini come on for Carrasco and Mertens.

Jan Vertonghen loops a header back over the goalkeeper from a crazy angle.

Belgium did get one back from a fantastic header courtesy of Vertonghen. Japan couldn't clear their lines from a corner, and the ball found Vertonghen who saw his looping header beat Kawashima to give the Belgians hope with half an hour left.

Martinez's side were now piling on the pressure, and their hard work paid off. Hazard, who was causing Japan problems all night, found substitute Fellaini in the box and he headed home to restore parity for Belgium with fifteen minutes remaining.

Japan looked fatigued, and Belgium almost completed the comeback. Chadli's header forced a stop from Kawashima, and he was forced into action a few seconds later as he tipped over Lukaku's header.

2 - The last team to come from two goals down to win a World Cup knockout round match were Germany against England in 1970. Mountain. #BEL #JPNBEL #WorldCup

Courtois was forced into a late stop as Honda's free-kick was heading for the bottom left-corner, before the Chelsea shot-stopper pulled off a good stop.

And here are how #BEL and #JPN are shaping up for #BELJPN...

Thoughts on the teams? #WorldCup pic.twitter.com/N2JNZkPL0v