Despite three penalty saves, Kasper Schmeichel could not make himself a national hero as Denmark were cruelly dumped out of the ​World Cup on penalties.

Ivan Rakitic delivered the winning penalty in the shootout on Sunday, after an enthralling day of football saw two penalty shootouts in Russia.

RAKATIC STEPS UP FOR #CRO

AND HE SENDS HIS COUNTRY THROUGH TO THE QUARTERFINALS

After 120 minutes it finishes 1-1, after penalties Croatia win 3-2. pic.twitter.com/QRJZ4ZRcFD

The game got off to a lightening start when, with less than two minutes on the clock, Thomas Delaney brought the ball down from a cross and Mathias

Having got off to a nightmare start, Croatia replied immediately when a knock-down fell to Mario Mandzukic, who swept the ball home on the turn from six yards past a helpless Schmeichel.

Croatia had opportunities to extend their lead with good chances inside the box, however alert goalkeeping from Schmeichel kept the scores down and helped the game to develop some sort of rhythm after a crazy opening. 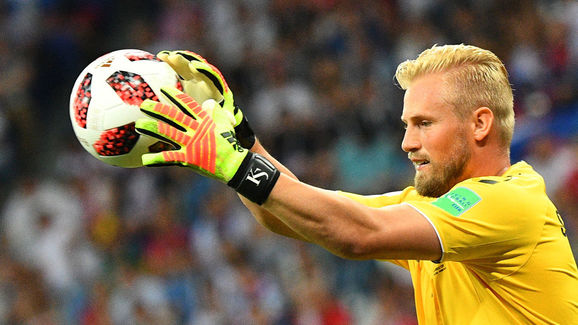 They were presented with another fantastic chance just six minutes before the break, when Dejan Lovren headed wide from Luka Modric's free kick on the left flank.

There was still time for either side to have a chance before the half time whistle. Christian Eriksen tried to dink an effort from nothing inside the far post, but it bounced off the top of the crossbar and away to safety.

Two minutes later, Rakitic saw his shot from just inside the edge of the box well saved by Kasper Schmeichel, who got down quickly to make the stop.

The early goals of the game is the telling story so far...#CRO 1-1 #DEN at the break.#CRODEN #WorldCup pic.twitter.com/ZmVAqOeoIt

Denmark made a substitution at half time, with Lasse Schone coming on to replace the tired Andreas Christensen, who has had an impressive season last term with Chelsea.

The second half settled rather quickly, with

Croatia pushed for a late winner in the last ten minutes, with several players having efforts at goal that were not even close to troubling Schmeichel. Their best chance came six minutes from time, when they played the ball out wide and Ivan Perisic headed wide from a dangerous cross.

Neither side has ever played extra time at a #WorldCup

Can someone claim a winner before the 90 minutes are up?#CRODEN pic.twitter.com/u3LKMRnLAe

With both sides battling for a winner, Rakitic saw his name up in lights in the 92nd minute, when he had the opportunity to hit a shot from distance - only for it to flash wide of Kasper Schmeichel's right-hand post.

However, there was still another chance left as Denmark goal scorer

Both teams pushed for a winner in extra time, with Knudsen's long throw-ins causing particular problems for the Croatian defence. However, it seems that nerves kicked in for Croatia as Denmark began to dominate the play once again. A finish was elusive and they will certainly have rued their chances at that stage.

The second half of extra time proved to be a cagey affair, with substitute Pione Sisto creating a fantastic chance when he curled his shot wide after 117 minutes.

With just over five minutes to go, the game turned on its head when Kramaric raced onto a fantastic through ball from and was brought down in the box by Mathias

So to penalties it went, a chance for somebody to make their name as a national hero. It was Christian Eriksen who stepped up first, but Subasic was equal to it and tipped the kick onto the post. Advantage Croatia.

Milan Badelj stepped up for Croatia, but unbelievably it was Schmeichel again who made the save.

After four successive penalties tucked were tucked away, it was Subasic who looked to turn hero as he dived to his right to deny Ajax's Lasse Schone.

Josip Pivaric stepped up to extend Croatia's lead but, yes, Schmeichel was there to deny him again.

Ok now, deep breath everyone, as we're not done yet #RUS are into the quarter-finals. Who's joining them? #CRO or #DEN?