Belgium secured their place as winners of Group G with a 1-0 victory over England in the ​World Cup on Thursday.

A stunning curled effort from Adnan Januzaj wrapped the game up early in the second half, with both teams making a host of changes from their previous games.

Not the result we wanted, but the #ThreeLions go through to the last 16 of the #WorldCup regardless.

Thanks to everyone for their support tonight – superb yet again.  pic.twitter.com/m6srqgGhBv

The game started on a relatively even footing, with Belgium having the first chance when Youri Tielemens's shot produced a fantastic reaction save from Jordan Pickford in the England goal.

Minutes later, a bizarre defensive mix-up in the box saw Pickford lose the ball whilst on the floor, but was rescued when Gary Cahill slid in to clear the ball off the line.

England looked to get on the ball and go forward, but the absences of Jesse Lingard, Raheem Sterling and Harry Kane were glaring in their attacking play. 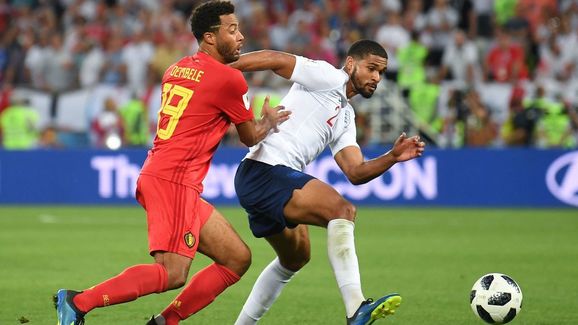 Belgium broke into the box themselves, and had tame efforts at goal through Marouane Fellaini and Adnan Januzaj, although strong defending from Fabian Delph and Phil Jones cleared the danger.

With neither side particularly dominating the game, England had a couple of half chances before the break - with Trent Alexander-Arnold's whipped cross almost deceiving Thibaut Courtois, before Ruben Loftus-Cheek headed wide from a corner.

Less than six minutes into the second half, Belgium broke the deadlock when Adnan Januzaj picked up the ball on the edge of the box, turned Danny Rose inside-out and curled his left-footed shot into the top corner.

The game then calmed down somewhat, although England had a glorious chance on 66 minutes when Marcus Rashford was played through one-on-one. However, the ​Manchester United youngster couldn't get enough curl on his shot and forced a good stop from Courtois.

Belgium then looked to settle the game down, not creating too much as they held on to their lead - which would ultimately see them move on to top the group.

The victory for Belgium was confirmed by the full time whistle four minutes later, meaning England's unbeaten run at the World Cup draws to an end and any momentum appears broken.

#ENG Team news for this evening...

Here's the Belgium line up...