​Germany may have suffered a humiliating early exit in the 2018 World Cup following their 2-0 defeat at the hands of South Korea on Wednesday, but that didn't stop them from accepting their defeat graciously.

With Sweden defeating Mexico 3-0 to send both sides into the knockout stages, the official Twitter account of the German national side was used to send a message of good luck to the two victorious nations of Group F.

As much as it hurts to bow out this early, congratulations to #SWE and #MEX. We wish you good luck in the knockouts  pic.twitter.com/6gbNpePRTm

​​The tweet was a magnaminous move by Germany, who have been left reeling by their side's first exit from the World Cup group stages since 1938.

After winning the 2014 tournament in style to claim their fourth World Cup title, Germany were considered one of the favourites to go all the way once again this year. However, Die Mannschaft suffered a shock 1-0 defeat against Mexico in their opening match to leave their group open for the taking.

After Toni Kroos' stunning 95th-minute winner gave Germany an unconvincing win over Sweden in their second match, they only needed a win against South Korea to book their place in the last 16. Instead, Joachim Loew's side collapsed, conceding two goals in stoppage time en route to finishing bottom of their group.

Germany missed a host of chances which could have sent them through, including defender Mats Hummels managing to miss a glorious headed chance from six yards out near the end of the game. 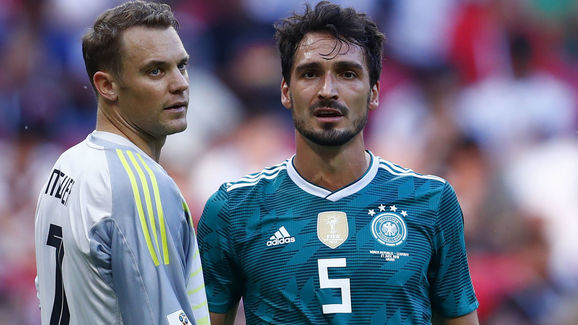 Group F winners Sweden will now face Switzerland in the first set of knockout fixtures. Meanwhile, second-placed Mexico face a tough clash with Group E winners Brazil, who beat Serbia 2-0 after Germany's defeat to confirm their place in the next round of the tournament.