Serbia 0-2 Brazil: Selecao Through to Last 16 After Crucial Win in Final Group Game in Moscow

​Goals from Paulinho and Thiago Silva meant Brazil booked their place in the last 16 of the World Cup as Group E winners, knocking Serbia out in the process.

Brazil started the brighter of the two teams in the opening exchanges, although it wouldn't be until the 25th minute when Vladimir Stojkovic was forced into the first meaningful save of the game, palming away Neymar's effort from a narrow angle - that appeared to be heading wide -after some intricate build-up play.

Chances fell for both nations in the ten minutes that followed, before the Selecao took a deserved lead just after the half hour mark. Spotting the deep run from Paulinho, Philippe Coutinho matched the burst forward with an exquisite pass, giving his Barcelona teammate the simple task of dinking the ball over Stojkovic to break the deadlock.

With the goal advantage, Tite's side controlled what remained of the half, as Neymar's curling effort from the edge of the area that flashed just over was a measure of the confidence the five-time World Cup winners were playing with.

Barring set-pieces, Serbia didn't look like threatening Alisson's goal in the first half, and desperately needed to show some attacking impetus in the second period if they wanted to keep their World Cup hopes alive.

 @Phil_Coutinho has been involved in three of the four Brazil goals at this World Cup so far (two goals, one assist) #SRBBRA pic.twitter.com/zHas6fxolo

Mladen Krstajic's side started the second half far more positively, who now had to take the game to their opponents. Adem Ljajic's poor pass ruined a promising counter attack for Serbia, before his cross almost found the back of the net, after Miranda sliced his clearance just over.

Brazil however were set for the counter attack, and almost made it two from the resulting corner, although Neymar wasted a great chance to double his side's lead, firing straight at Stojkovic which would've given the South American's breathing space.

Serbia were having joy with crosses that were causing chaos in the Brazil penalty area. With Alisson and his defence looking far from convincing, Aleksandar Mitrovic passed up two opportunities in the space of five minutes. His first was a tame header blocked by Thiago Silva, before he climbed well five minutes later, but headed straight at Alisson. 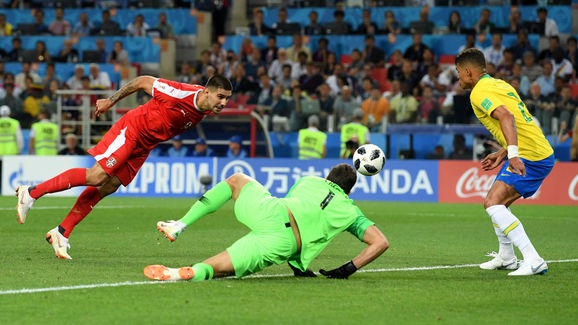 Despite their efforts going forward, it would be the men in yellow who scored the second of the game, thanks to a header of their own from Thiago Silva. The centre back powered home Neymar's corner at the near post in the 68th minute to give Brazil a two goal cushion.

Their were chances for Felipe Luis and several for Neymar to add some gloss to the scoreline late on for Brazil, although it would only be the two on the night, who confirmed a last 16 tie against Group F runners up Mexico on Monday.