Russia tasted defeat for the first time in this summer's ​FIFA World Cup, as an impressive free kick from Luis Suarez, an unfortunate own goal and an opportunistic effort by Edinson Cavani sealed a deserved victory for Uruguay in Samara on Monday.

Both sides had already qualified for the last 16, but Uruguay's win confirmed them as Group A winners.​ It also provided Russian fans with a harsh but timely reality check, tempering the wild optimism which had been generated by their side's performances in their first two matches.

Who will top Group A?

The hosts had already surpassed many of their fans' expectations by emphatically defeating ​Saudi Arabia 5-0 and ​Egypt 3-1. However, Uruguay had also won against the same opponents, albeit far less convincingly than Russia. In any case, the South Americans were always likely to present a far tougher challenge than the Saudis or the Egyptians - and so it proved.

Uruguay dominated a frenetic opening period, and it was no surprise when Suarez fired La Celeste into the lead in the 10th minute. Yuri Gasinsky picked up an early booking for a foul on Rodrigo Bentancur just outside the Russian penalty area, which gave Suarez the opportunity to drill a free kick low to Igor Akinfeev's left for his second goal of the tournament.

7 - Luis Suárez has now scored seven goals for Uruguay at the World Cup; only Oscar Miguez (8) has netted more in the competition for La Celeste. Finisher. #URURUS #URU #WorldCup pic.twitter.com/3WWXcSAied

If the hosts were flustered by conceding so early, they didn't show it. They attacked with pace and purpose, and Denis Cheryshev might have equalised almost immediately if he hadn't shot straight at Fernando Muslera. Minutes later, striker Artem Dzyuba missed a good opportunity to equalise, as his header from a Cheryshev corner bounced over the bar.

Then, in a cruel twist for the Russians, Uruguay doubled their lead against the run of play in the 23rd minute. It was also an exceptionally fortuitous goal, as a speculative effort from Diego Laxalt took a massive deflection off Cheryshev. Akinfeev's positioning for the first goal was poor, but he had next to no chance with the second. To their credit, Russia still didn't seem deterred, even though they now had a mountain to climb. However, their positive attacking approach left them exposed on the break, which could have cost them very dearly if either Bentancur or Suarez had been more clinical when presented with golden opportunities.

Things got even worse for the beleaguered hosts when Igor Smolnikov was given his marching orders for a second bookable offence in the 36th minute. Somehow, they had to claw back a two-goal deficit with ten men - and in the absolutely searing heat of the Samara Arena. The one small mercy for the hosts was that Uruguay failed to extend their lead before half time.

 @DiegoForlan7 was the last player to score a direct free kick goal at the #WorldCup for @Uruguay. He netted his goal against Ghana in 2010

 Only #URU and #CRO are yet to concede at this year's #WorldCup #URURUS pic.twitter.com/sjptAZQdLD

In spite of Russia's deficit, the atmosphere in the stadium remained buoyant in the second half, and the home fans continued to roar their side on whenever they attacked. However, the Russians were invariably let down by their poor delivery or choice of pass.

Meanwhile, La Celeste generally looked happy to settle for a 2-0 scoreline - with the possible exception of striker Cavani. The Paris Saint-Germain striker looked as if he was going to endure yet another frustrating World Cup match, wasting two promising opportunities to score within five minutes. 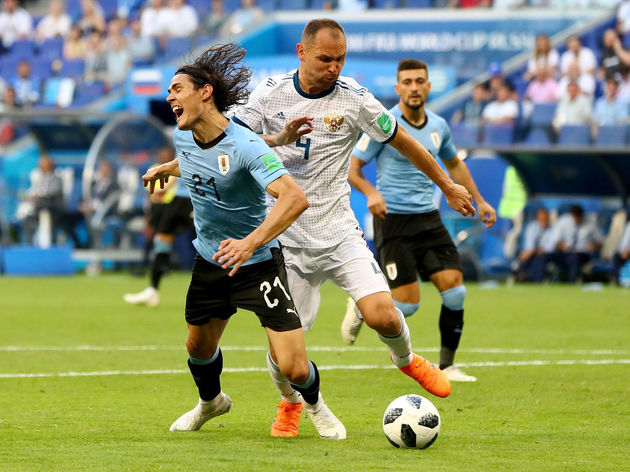 Suddenly, Dzyuba was presented with a golden opportunity to halve the deficit in the 74th minute, after a rare error by Muslera. Sadly for the hosts, he could only slice his effort well wide.

Uruguay were also wasteful on a couple of occasions, not least when Suarez failed to find Cavani with a low cross, while Russia's Fedor Smolov could have done better when he found himself in an excellent crossing position in the 85th minute. Instead, he could only fire straight into Muslera's arms.

In truth, Uruguay were far superior to Russia in the second half, and Cavani finally got his goal in the 90th minute, forcing the ball home from close range after Akinfeev had saved Diego Godin's header from a corner.

It was the icing on the cake for La Celeste, who looked far more comfortable and confident than in either of their first two World Cup matches. It also capped a miserable encounter for the Russians, who were second best in every department.

We have our first set of teams confirmed!

​​Uruguay and Russia will now face the Group B runners up and winners respectively in the round of 16. Spain and Portugal are most likely to qualify from that group, although Iran are still in with a chance. Whoever wins Group B is unlikely to lose any sleep about the prospect of facing the Russians - at least going by their showing against Uruguay.