Two fantastic finishes from Ahmed Musa gave Nigeria a well-earned victory over Iceland in their ​FIFA World Cup Group D clash at the Volgograd Arena on Friday, which improved dramatically in the second half. The result leaves Iceland's World Cup hopes hanging by a thread, while Nigeria now have an excellent chance of progressing to the round of 16.

​Argentina's shock 3-0 defeat against Croatia meant that second place in Group D was up for grabs. Going into the match, Iceland definitely had more reason to be confident - the Scandinavians had earned a creditable 1-1 draw with the Argentinians in their opener, whereas Nigeria had succumbed to a fully deserved 2-0 defeat against Croatia.

Given Iceland's somewhat pragmatic style and Nigeria's poor form - not to mention the oppressive heat in Volgograd - the match didn't look likely to be a classic. Sadly, the first half didn't surpass expectations. Iceland's passionate supporters and their trademark thunderclaps were more entertaining than much of the action on the pitch.

Admittedly, Gylfi Sigurdsson tested Nigeria goalkeeper Francis Uzoho with a trademark free kick within the first few minutes of the match. Apart from that, there were few moments of outstanding quality from either side in the first half. At one point - during an exchange of headers between the two sides - the match resembled an English league match from the early 1990s, back in the days of 'kick and rush'. It was no surprise that Iceland's best opportunities came from set pieces and long throws. However, 19-year-old keeper Uzoho had a relatively untroubled half, as Iceland failed to convert their pressure into shots on goal. In all fairness, Nigeria only threatened Iceland very sporadically, in what must have been a frustrating stalemate for both sides.

As the first half drew to a close, the Nigerian defence had to endure a few scares from a flurry of Icelandic crosses, but the match was level and goalless at the break. At that point, it looked ominously likely that we were about to have our first goalless draw of this year's World Cup.

It seemed that it would take either a crass error or a moment of inspiration to break the deadlock. Fortunately for the neutral, it was a moment of inspiration - Ahmed Musa showed impeccable technique to control Victor Moses' fine cross into the Iceland penalty area, before firing an unstoppable shot past Hannes Þór Halldórsson to give Nigeria the lead in the 49th minute.

To make matters worse for Iceland, defender Ragnar Sigurdsson suffered a freakish head injury, as Musa accidentally caught him immediately after scoring. Fortunately, the Iceland defender is made of stern stuff, and after having his head bandaged, he was able to continue.

​​The goal seemed to energise both sides - Halldórsson saved well from a long range Wilfred Ndidi strike, Gylfi Sigurdsson appealed unsuccessfully for a penalty after good work down the right, and the overall quality of the football on display improved dramatically.

The Super Eagles had started to fly, but Iceland were still very much in the game, with Rurik Gislason firing a fierce strike over the bar from long range as the match entered its final quarter. 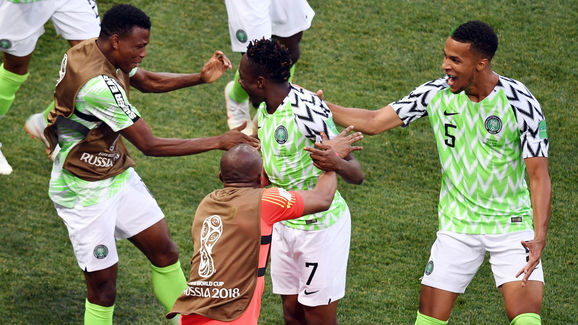 Yet it was Nigeria who turned the screw, with Musa adding another superb goal in the 75th minute. The ​Leicester City striker took a long pass in his stride and dribbled nonchalantly round Halldórsson before firing home. Just minutes earlier, he had hit the bar with a magnificent long range strike, but he wasn't to be denied for long.

Iceland could have halved the deficit when they were correctly awarded a late penalty by VAR, but then we witnessed a collector's item - a terrible penalty miss by Iceland's most gifted player, Gylfi Sigurdsson. Still Iceland pressed, and Alfred Finnbogason forced a decent save from Uzoho, but Nigeria held on for an excellent victory.

This result has thrown Group D wide open, as all three of Nigeria, Iceland and Argentina could still reach the round of 16 along with Croatia. A win against Argentina would see Nigeria through, while both Iceland (who face Croatia in their final game) and Argentina need to win their matches to stand any chance of progress.