Australia picked up their first point of their ​World Cup campaign after cancelling out Denmark's opener to secure a 1-1 draw following the intervention of VAR,

The afternoon started on the right note for Denmark after Christian Eriksen opened the scoring in fine fashion after unleashing an unstoppable strike, before Mile Jedinak levelled the scores after comfortably tucking away a penalty following another questionable intervention from VAR.

A first point of the 2018 #WorldCup for the @Socceroos, while @dbulandshold maintain their unbeaten run in Group C...#DENAUS pic.twitter.com/iVhv0ok4aS

The Group C encounter in

After struggling against their South American opponents last time out, Denmark quickly sought to take a strangle hold on proceedings, and they needn't wait long for their early dominance to be reflected on the scoreboard - seven minutes in fact. With the Aussies failing to clear their lines after a bout of pressure from the Danes, an opening into the centre of the box emerged and an exquisite piece of hold up play and reverse ball from

That beautiful beard is unstoppable from the penalty spot! 倫#AUS pic.twitter.com/VHeeQGTbkQ 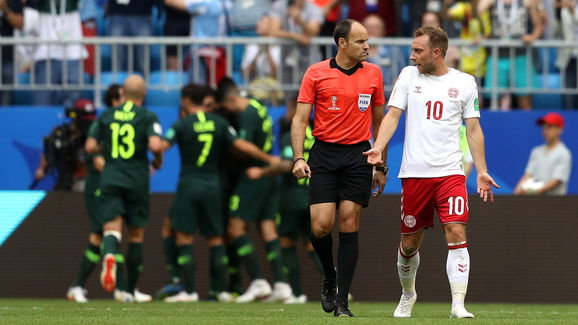 The interval did little to change the tempo and attacking intent from both sides as each went in search of the winner, and whilst possession continually changed hands Denmark appeared to be the struggling party despite their initial bright start to the game.

Man, Australia can ball. More than capable of patiently retaining the ball, waiting for spaces to open, but also pretty compact off the ball and capable of doing well in offensive transition when they get it back. Bert Van Marwijk doing wonders.

Australia, your starting XI is in!