Spain goalkeeper David de Gea has admitted that he feels as though he doesn't get enough support from his country following Friday night's howler against Portugal. The Iberian derby ended 3-3 in what could well become the game of the World Cup, but a costly error from De Gea resulted in Spain failing to win.

An early spot kick from Cristiano Ronaldo meant that there was little the stopper could do to prevent Portugal taking the lead against the Spaniards; and late on, another Ronaldo set piece saw the ​Real Madrid forward strike a brilliant free kick that the ​Manchester United keeper had little hope of stopping. But it was the goal sandwiched by these two efforts that have embarrassed the world's best goalkeeper. A speculative effort from Ronaldo looked an easy save - rolling towards De Gea's gloves, but he fumbled the save and the ball ricocheted into the net.

And now, De Gea has admitted that the backing from his team and manager in the aftermath cannot be questioned, but the Spanish public is a different matter. 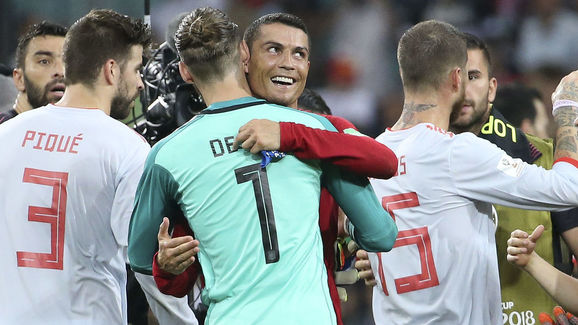 “I don’t see much that they support me from Spain,” De Gea added. “My own criticism is bad enough. I would have liked that they defend me more in a difficult moment in my life, with an issue from outside the game. I am happy with the support from the manager and the lads. “This can happen. It’s a mistake. We put on our gloves and go out into the field and we know how difficult it is. I count on the support of the coach and my colleagues to continue. I will stay calm. It was a difficult ball, I’ll keep training and try to do things right. I haven’t killed anyone.”