​​Fulham have opened talks with ​Swansea over the signing of Jordan Ayew after the two clubs swapped divisions last season.

Ayew was Swansea's top scorer as they were relegated from the ​Premier League but Fulham - who were promoted via the playoffs - could offer the Ghanaian a chance at top-flight redemption.

SKY SOURCES: @FulhamFC in talks to sign Jordan Ayew from @SwansOfficial and have made an £8m bid for the forward. #SSN pic.twitter.com/QT22VJZdtf

​Sky Sports News understands that the Cottagers have made a bid of £8m for the 26-year-old, whose departure could be the catalyst for a mass exodus. Lukasz Fabianski and Alfie Mawson are also likely to leave the Liberty Stadium before the 2018/19 season begins.

Ayew joined Swansea from ​Aston Villa in January 2017, but his strike rate has been lacking, with just 12 goals scored in over 50 appearances for the Swans.

He was joined at the club by his older brother Andre earlier this year but it seems that the two will be separated once more as Fulham close in on completing the transfer. 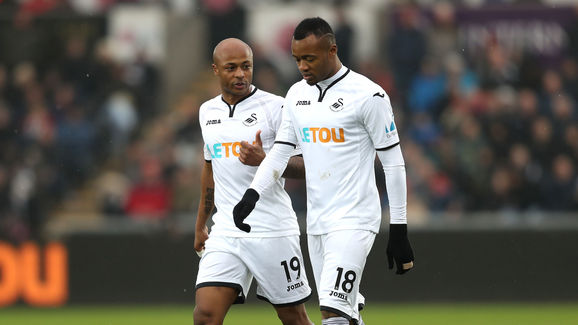 ​Swansea appointed Graham Potter as their new manager on Monday and he may be willing to sell both Ayew brothers as part of a radical squad overhaul.

Fulham are aiming to bolster their attacking options, as the future of top marksman Aleksandr Mitrovic is uncertain.

The Serbian, who is part of his country's World Cup squad, joined Slavisa Jokanovic's team on loan from Newcastle in January and scored 12 crucial goals, more than any other Fulham forward. Only Ryan Sessegnon scored more over the course of the season.

Aleksandar Mitrovic has scored 14 goals in his last 18 games for Serbia. How does that song go again?  pic.twitter.com/EN5rHTkjso

He was a famously temperamental character at ​Newcastle but his ​Championship form may convince Rafa Benitez to give him another chance, with the Magpies struggling for goals last season.