England will host Costa Rica in a World Cup warm-up match Elland Road on Thursday. It will be manager Gareth Southgate's last opportunity to put his players through their paces in an international clash before they kick off their FIFA World Cup campaign against Tunisia on June 18.

The Central American side aren't expected to make a major impact at this summer's tournament in Russia, after finishing second behind Mexico in the CONCACAF qualifying group. Then again, no one expected much from them in Brazil in 2014 - and they finished top of England's group, while the Three Lions finished bottom.

Southgate's charges will certainly hope for a more inspiring performance against Costa Rica than they managed in a 0-0 bore draw in their final match of the 2014 World Cup - though, on the plus side, that was their only point of a dismal campaign. Despite being heavily criticised for their performances in qualifying for this summer's World Cup, it's worth remembering that England won eight and drew two of their ten qualifiers, conceding just three goals in the process.

The Three Lions' endeavours since confirming their qualification have been respectable rather than dazzling. Nevertheless, as well as drawing with Germany, Brazil and Italy at Wembley, they have earned deserved victories over the Netherlands and ​Nigeria. 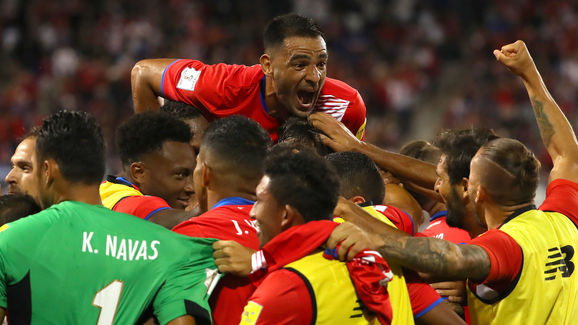 Costa Rica's qualifying campaign was rather less straightforward than England's, as they dropped 14 points in total. Nevertheless, they gained two emphatic wins over the United States.

Their results since qualifying have been a mixed bag, including a 5-0 hammering by Spain and losses against Hungary and England's Group G opponents Tunisia. Nonetheless, Óscar Ramírez's side have impressed against England's fellow Home Nations, defeating Scotland 1-0 in March and hammering Northern Ireland 3-0 in their most recent match. Despite Costa Rica's lowly FIFA ranking - they are 12 places below England in 25th - Southgate will no doubt be wary of his opponents' record of upsetting the odds against more fancied opponents.

As well as stunning both Scotland and Sweden in 1990 - and scoring a sumptuous team goal against the Scots in the process - Los Ticos were at it again in 2014, defeating Uruguay 3-1 and Italy 1-0 on their way to a quarter-final against the Netherlands, which they only lost 4-3 on penalties. At his press conference on Wednesday, England manager Southgate announced that Jack Butland will start in goal against Costa Rica, while ​Liverpool right back Trent Alexander-Arnold will win his first England cap.

There will also be a significant Yorkshire contingent in the starting lineup in Leeds, with five Yorkshire-born players scheduled to start. There are seven Yorkshireman in Southgate's World Cup squad, including first choice defenders Kyle Walker and John Stones and striker Jamie Vardy.

Costa Rica manager Ramírez will likely deploy his favoured 5-4-1 formation on Thursday, in a bid to frustrate the Three Lions and hit them on the counterattack.

Both squads currently have a clean bill of health. He may have his erratic moments, but the ​Real Madrid shot-stopper is still one of the best in the business. If Costa Rica are to make any significant impact in Russia, Navas will most likely be key to their success.

Even if England break down what is likely to be a stubborn Costa Rica defence, Navas is likely to be a formidable obstacle. He'll almost certainly do a better job of frustrating the Three Lions than his Nigerian counterpart managed on Saturday. World Cup warm-ups are rarely reliable indicators of any side's prospects in the tournament proper, and Thursday's clash will likely be no exception. There are unlikely to be many hot-blooded challenges at Elland Road, seeing as everyone will be anxious to avoid any unnecessary injuries.

That said, Costa Rica may provide a useful test for England, who have generally been far more impressive on the counterattack than when they have to break down a well-marshalled, deep-lying defence - which is what they're likely to come up against in ​Leeds.

Still, the gulf in attacking class between the two sides may ultimately prove decisive. A narrow England victory may be the likeliest outcome.