​​Real Madrid captain Sergio Ramos is doing himself no favours to amend his reputation with Liverpool supporters, after mocking the reaction to incidents between himself and Liverpool pair Loris Karius and Mohamed Salah

A number of Reds fans were claiming the Spanish defender intentionally injured both players during the match in Kiev, after he inflicted damage to 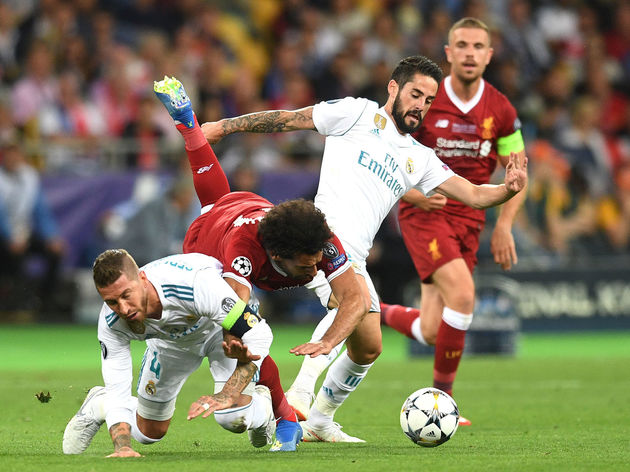 A ​head scan on Liverpool's goalkeeper Karius revealed the 24-year-old German suffered the concussion following a collision with Ramos in the penalty area, potentially resulting in two game changing errors from the Reds shot stopper.

However, since joining up with the Spanish national team ahead of the World Cup, Ramos has dismissed any notion that the injuries sustained by Salah and Karius were the result of any deliberate attempt to inflict harm on the ​Liverpool duo.

Speaking on the day he joined the Spanish national team, Ramos spoke out on the situation, strongly disregarding any accusations of foul play:

Love him or loathe him, Sergio Ramos has played a key role in three of four Champions League finals Real Madrid have won since 2014.

"I see the play well, he grabs my arm first and I fell to the other side, the injury happened to the other arm and they said that I gave him a judo hold," he continued, AS

"After the goalkeeper [Karius] said that I dazed him with a clash with me I am only missing (Roberto) Firmino saying that he got a cold because of a drop of my sweat. "I spoke with Salah through messages he was quite good. He could have played if he got an injection for the second half, I have done it sometimes but when Ramos does something like this, it sticks a little bit more.

"I don't know if it's because you're at Madrid for so long and win for so long that people look at it a different way."

After undergoing a series of head scans in Boston, it has been revealed that Liverppol's goalkeeper, Karius, suffered a concussion after Ramos appeared to elbow him following a Madrid corner.

The collision between the two players came just minutes before Karius' first, and most bizarre, mistake whereby he rolled to ball at Karim Benzema's feet, with the Frenchman intercepting the ball and scoring Madrid's opener.