W90
WorldNews
Lists
Next Article
Champions League: What Can Be Decided on Matchday Four?

​​Real Madrid forward Gareth Bale was named Man of the Match by 90min readers after his side's 3-1 Champions League Final win over ​Liverpool on Saturday night, after scoring two crucial goals to assure his side's victory.

The Welsh wonder raked in over 20k votes, beating the likes of Sadio Mané and Karim Benzema to the award. 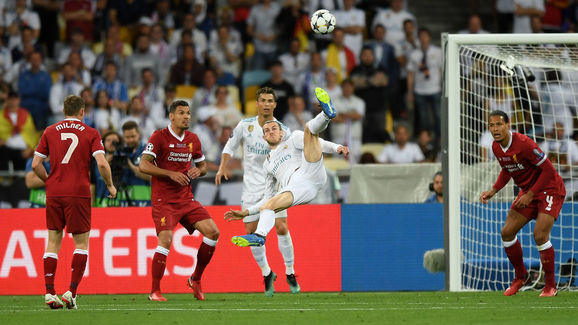 Despite being left out of the starting lineup, the 28-year-old racked up some highly impressive statistics during his thirty minute cameo appearance, scoring with both of his two shots, achieving a 78% pass completion rate and managing a 100% success rate with his dribbles.

Bale was introduced to the game in the 61st minute when the game was delicately poised at 1-1, and took just three minutes to score - unleashing a stunning overhead kick to give his side the lead.

The former ​Southampton man then found the net again late on, after his speculative, long range effort was fumbled by Reds stopper Loris Karius into the back of his own net.

Los Blancos' victory saw Bale notched up his fourth Champions League title since joining the club from Tottenham Hotspur in 2013.

The stunning performance is likely to see an upsurge in interest for the tenacious player's services this summer, as ​elite teams from across Europe look to lure him away from the Bernabéu after five successful seasons in La Liga.

With Bale claiming a mighty 79% of the votes, the closest contender was Liverpool's Sadio Mané, whose equalising goal earned him a 13% share of the votes. 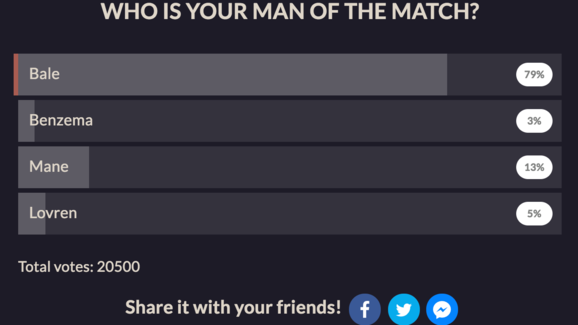 Reds defender Dejan Lovren, who impressed despite defeat, claimed 5% of the votes for his defensive efforts against Cristiano Ronaldo et al, while Los Blancos striker Karim Benzema earned 3% of the share for opening the scoring.