​In the immediate aftermath of ​Real Madrid's third consecutive Champions League crown, both Cristiano Ronaldo and Gareth Bale unsettled the celebrating fans with cryptic comments over their immediate futures.

Real Madrid, powered by substitute Bale's second half strikes, ​won a 13th European title at the expense of Liverpool in Kyiv on Saturday night, but comments from the club's two star performers have left many feeling concerned about the summer ahead.

Speaking to BeIN Sport and Antena 3 reporters (via the ​Mirror), Ronaldo said: "Now to enjoy, and in the next few days I will give an answer to the fans that they are on my side. It was very nice to be in Madrid." 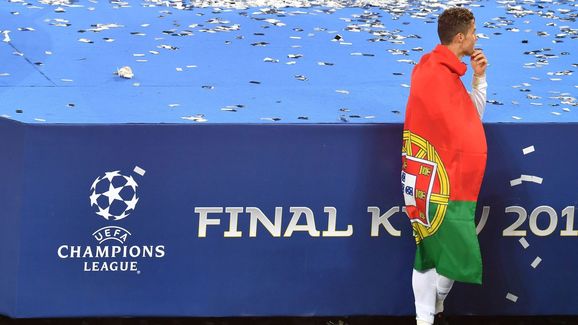 The former Manchester United star's pointed use of the past tense is particularly troubling for Madridistas. When quizzed

"In the next few days I will give an answer, now we have to enjoy the moment, the future of any player is not important, we have made history," he continued.

In further quotes from the mixed zone (via ​Marca), the Ballon d'Or holder - who, despite top scoring in this season's competition again, was somewhat upstaged by Bale in the final - hinted at underlying problems at Madrid.

He said: "I spoke and I should not have done it, but something is going to happen, it is not the right time, but I was honest, I will say something in a week because the fans have always supported me and they are in my heart.

"It [the problem] comes from afar, money is not the problem. I've won five Champions Leagues, five Golden Balls. I was already in the story, but now even more. I'm not upset because I know what I give to the club. I do not want to erase this unique moment, with my teammates who are champions."

While fans will now wait with baited breath for Ronaldo's next statement clarifying his future, Bale too added fuel to the fires of transfer speculation by insisting he needs to be playing regularly.

The 28-year-old Welshman came off the bench to score one of the all-time great goals to give Real Madrid a 2-1 lead over ​Liverpool, before adding the third and final nail in the Reds' coffin with a long range drive that was spilled by Loris Karius.

Bale has been linked with ​Manchester United and a return to ​Tottenham in the past and his comments have done little to play down rumours of unhappiness in the Spanish capital.

Speaking to BT Sport after his side's win, Bale said:

"The best I have been doing is to come on and make an impact, I certainly did.

"It has to be the best goal in a Champions League final, there is no bigger stage. I am just happy to get the win.

"It is a team game but when you are a substitute, it is a game of more than 11 players. I made an impact.

"I need to be playing week in, week out and that has not happened this season. I had an injury five, six weeks in but fit ever since. I have to sit down with my agent in the summer and discuss it."