PHOTOS: Andres Iniesta Camps Out in Centre Circle After Final Ever Appearance for Barcelona

Barcelona said goodbye to one of the club's most loyal servants on Sunday as Andres Iniesta played his last ever game for the Catalan outfit.

The Blaugrana paid tribute to their captain in spectacular fashion, with the Spaniard's name resonating around the Nou Camp throughout their ​1-0 win over Real Sociedad, prompting tears from the 34-year-old midfielder who had worn the blue and red of Barcelona from youth level in 1996. 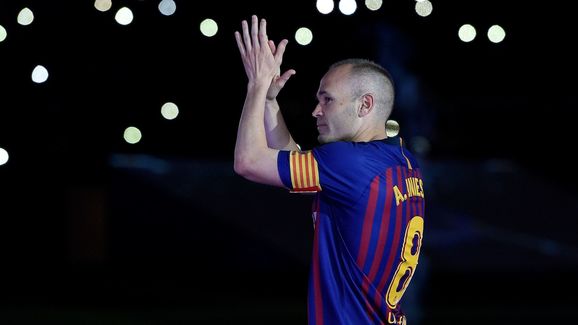 ​Following the full time whistle a ceremony was held to celebrate Iniesta's extraordinary career with ​Barca, with teammates hoisting the Spaniard in the air before he gave an emotional goodbye speech and gave hugs to everyone at the club as a means of expressing his gratitude.

Evidently it was an tough for Iniesta to say goodbye to the club that he had spent all 17 years of his senior career with and the scenes at the Nou Camp early on Monday morning perfectly demonstrated his connection to the Spanish champions.

Man, these are some incredible photos from @davphoto20.

After all was said and done, Iniesta went back onto the Camp Nou field one last time to soak it all in pic.twitter.com/oEAueT6c0C

Long after the full time whistle had gone and the curtains were drawn on his magnificent Barcelona career, Iniesta returned to the pitch, sat in the centre circle and proceeded to take everything in.