Andres Iniesta rounded off his highly decorated ​Barcelona career on Sunday evening with a vintage display during his side's ​La Liga curtain closer as they overcome Real Sociedad 1-0 in a teeming Camp Nou.

Despite the moment seemingly set for the midfield magician to show his magic one more time,

A touching mosaic dedicated to arguably Spain's greatest midfielder of all time, reading 'Infinit Iniesta', reached from floor to sky throughout Camp Nou as Real Sociedad welcomed the hosts through a guard of honour onto Catalonia's hallowed turf for the final time this season.

#BarcaSociedad 0-0 HT: Iniesta bidding farewell with a vintage Iniesta-esque performance. Dembele the other shining light in #Barca's ranks while Mina - who is yet to taste victory as part of Valverde's XI - continues to have another evening to forget.#infinit8Iniesta

After the break, Dembele lasted only eight minutes before being replaced by the in-form Denis Suarez, and the balance the 24-year-old brings had a swift effect as Coutinho netted an absolute stunner from range to hand Barcelona the advantage and head into double figures in Barca colours.

The Brazilian picked up the ball midway inside Sociedad's half before utilising the decoy run of Gerard Pique to his left to craft enough space to unleash a strike seen so often from the 25-year-old, which left goalkeeper 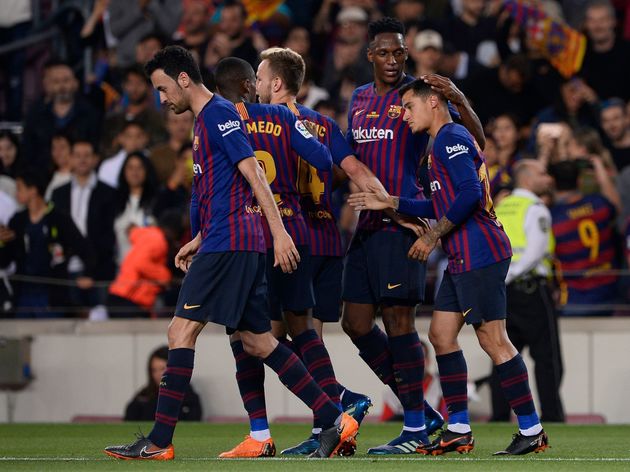 However, despite the former ​Liverpool man's sensational finish and the spell-binding football following the introduction of Lionel Messi, undoubtedly the moment of the second half came as Iniesta bid his final farewell to B