For years many ​Arsenal fans have aligned themselves into two factions: The Wenger Out Brigade (WOBs) and the those under the banner of Arsene Knows Best (AKB).

As Arsenal have drifted further and further from a Premier League title challenge and the later rounds of the Champions League, these two groups have grown louder in their furore and more vitriolic in their social media posts.

The WOBs were certainly the loudest group of fans, who took their took their frustrations with the Arsenal boss out onto the streets, into the stands of the Emirates Stadium, and onto our YouTube subscription feeds.

But finally, after 22-years, Arsene Wenger has gone. Surely now the Arsenal fan community must be a utopia of harmony, right? WOBs finally got what they have wanted for so many years, while AKBs can accept that all good things must come the end and their beloved manager must step aside. Wrong. Instead, the vocal contingent of Arsenal fans have already moved onto their next target - and he hasn't even been appointed yet.

Arsenal fans are in their right to feel a little underwhelmed at the prospect of Mikel Arteta becoming the next manager, ​who has emerged as the front runner to takeover from Arsene Wenger. However, Arsenal fans cannot continue to hound the next manager like they did towards the end of Wenger's reign.

This is uncharted waters for the modern Arsenal Football Club. Not for 22 years has the club had to oversee the changeover for management.

There's a lot of work for the next boss to do: overhaul the squad, implement his tactics, and get off to the right start with good results. Rightly so, he needs to win over the fans as well, but all of this will be made much harder in a negative atmosphere already protesting against the appointment.

During Arsene Wenger's final match in an away trip to Huddersfield Town, a banner flew overhead which read "Kroenke - You're Next!" 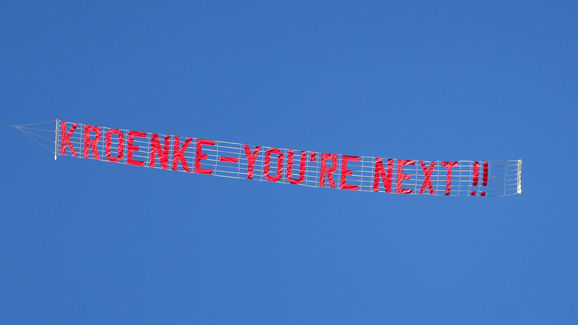 Stan Kroenke has received a lot of criticism from Arsenal fans for his non-committal style of ownership. During his time in control of the club the American businessman has never put any of his own money into the club and has not made any executive decisions regarding the club's management.

The organisation behind the banner was the 'No New Contract Movement', a group of Arsenal fans behind a number of the protests and banners in the aim of dethroning Arsene Wenger. But even though Wenger has announced his departure, the protests are due to continue.

"If we get [Mikel] Arteta or some other lightweight as a manager we'll keep protesting," said Chris Butler to the ​Evening Standard, who is a spokesman for the group.

"He [Kroenke] needs to show us he actually wants to win trophies otherwise we'll continue to hound him. If he appoints someone like Arteta and it goes wrong we won't blame the manager. We'll blame Kroenke."

If anyone genuinely protests because the manager they preferred isn't appointed then they should go and support another club.
Whether Arsenal appoints Mikel Arteta, Massimiliano Allegri, Leonardo Jardim or someone outrageous like Gary Neville, we need to unite behind the new man. https://t.co/8x69QmEnH6

Telling you right now, @Arsenal If you appoint Arteta as Manager, you're right back where you started, Split fan base, protests, uncertainty. Ridiculous move.

Even if you think Arteta is the wrong choice (and I understand the argument for that), protesting before he’s even had a chance is absolute buffoonery of the highest order. What exactly does that accomplish?

Hypothetically, if Arsenal were to appoint someone with real managerial pedigree such as Max Allegri from Juventus - who is at the top of many fans' wish lists - and it went wrong, the same level of protests would not be seen if compared to someone like Arteta.

Arsenal fans have every right to be anxious about the prospect of someone with no managerial experience taking over at the club, but they can't have everything that happens over the next season happen on their terms.

​While he is a highly regarded first team coach, appointing Arteta is certainly a risk. However, it would be a much greater risk when a large proportion of the fans are openly expressing how much they are against the appointment.

The departure of Wenger and the numerous backroom appointments and changes which are being made behind the scenes demonstrates Arsenal are going in a different direction. The fans need to do the same and stand united behind the new manager - whoever that may be.