As any England fan knows, the Three Lions are no strangers to early exits from major tournaments. More often than not, they've been the authors of their own downfall.

​Yet at the FIFA World Cup in France in 1998, even though England were eliminated by Argentina in the last 16, their fans weren't left with that all-too-familiar sense of 'same old England'. The defeat in Saint-Étienne was arguably one of the most compelling England matches of all time - and one which Glenn Hoddle's side scarcely deserved to lose.

It had everything a neutral could wish for - superb football, including arguably one of the goals of the tournament; fierce competitiveness from both sides from start to finish; at least two highly controversial incidents; and the unbearable drama of a penalty shootout. 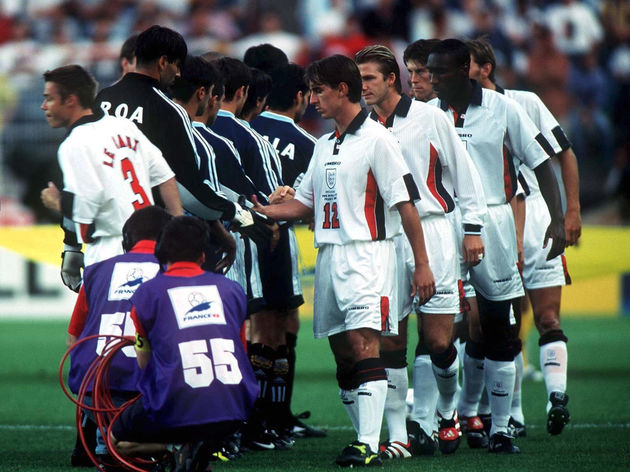 Of course, from an England perspective, even an eye-wateringly dull win would have been preferable to an enthralling loss. Yet, to their credit, Glenn Hoddle's side never looked beaten until David Batty's penalty was saved in the shootout - after extra time had finished with both sides deadlocked at two goals apiece.

All four goals were scored in the first half - or, at least, all of the four which were given by the referee (more on that later).

The two sides traded penalty kicks in the opening ten minutes - Argentina scoring first through Gabriel Batistuta, before England levelled through Alan Shearer. Both penalty awards looked more than a little questionable - England keeper David Seaman was penalised for what looked like a legitimate challenge on Diego Simeone, while Roberto Ayala appeared to make little (if any) contact on Michael Owen before the emerging England star went to ground. 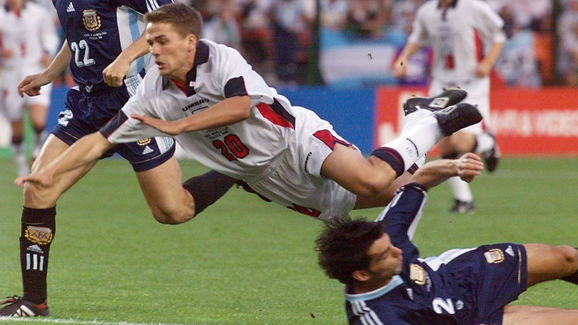 Then, in the 16th minute, Owen was released in midfield by a superb David Beckham pass, raced away from one opponent, then rounded another, before firing an unstoppable shot past keeper Carlos Roa. As well as being one of the goals of the tournament, it was arguably one of the best ever scored by England in any competition.

Despite intense Argentinian pressure, England defended superbly for the rest of the first half.

In added time at the end of the half, the Three Lions were caught out by a cleverly-worked free kick. With England seemingly expecting Juan Sebastian Veron to shoot, he instead played a perfectly-judged pass to the unmarked Javier Zanetti, who fired home from close range. 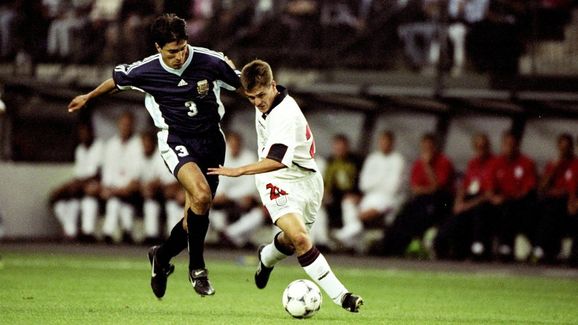 Simeone committed an ugly foul on Beckham, who retaliated while still lying on the ground. Beckham's kick looked more petulant than violent, yet the Argentina midfielder tumbled theatrically as if he'd just been shot.

As with Argentina's first-half penalty, Simeone's histrionics were enough to persuade Danish referee Kim Milton Nielsen to show Beckham the red card, while the Argentina captain was merely cautioned for the initial foul. 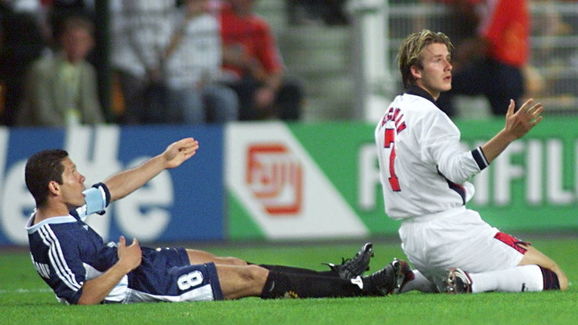 Thanks to Beckham's hot-headed naivety and Simeone's cynicism, England were now in a dire predicament. Playing against one of the favourites for the tournament had proved challenging enough with 11 players, never mind ten.

And yet, incredibly, it was England who scored the next goal. Or rather, they thought they'd scored when Sol Campbell rose majestically to head home towards the end of the 90 minutes - only for Shearer to be penalised for allegedly impeding Roa.

For all their dominance of possession after England had been reduced to ten men, Argentina created only a handful of chances, while both Owen and Tony Adams missed presentable opportunities. Now, for a contemporary England fan, the term 'penalty shootout' might as well mean 'almost inevitable defeat'. Yet, back in 1998, England had only been involved in three penalty shootouts at major tournaments, losing two against Germany and winning one against Spain.

Unfortunately for England, Paul Ince and Batty both saw their spot kicks saved, Hernán Crespo was the only Argentinian to fail to convert his penalty, and the South American side eliminated England for the second time in four World Cups, after Diego Maradona's heroics in 1986. 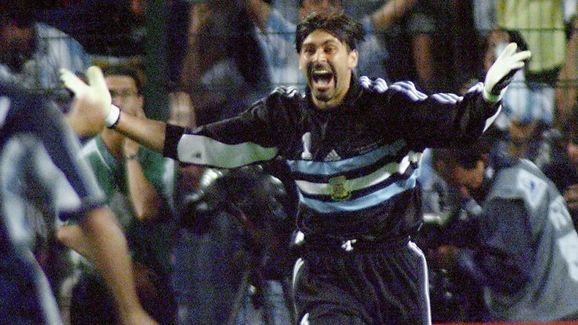 Poor Beckham was pilloried by fans up and down the country the following season, as they laid the blame for England's exit squarely - and not entirely fairly - at his door. However, four years later in the next World Cup held jointly by Japan and South Korea, Beckham and England would exact some measure of revenge against Argentina - with the ​Manchester United man scoring the only goal in England's win.

In some ways, the 1998 tournament was a strange one for the Three Lions. It was the classic 'curate's egg' - parts of it were excellent, not least memorable goals from Paul Scholes, Darren Anderton, Beckham and of course Owen. Other parts left a lot to be desired - especially England's feeble defending in the group stage loss to Romania.

Yet England's final group game - a 2-0 win over Colombia - and the first half against Argentina showed a side that was really beginning to gel, in a way that has proved elusive for most England sides at major tournaments.

Even Campbell - not a man noted for his forays forward - came close to scoring a phenomenal solo goal against Colombia. That's how confident England were starting to look. It makes you wonder what might have happened if Beckham had merely been cautioned for kicking Simeone. Then again, England's footballing history is littered with similar 'might have beens' and 'what ifs'.

Perhaps the biggest 'what if' of all is: "What if England could actually win penalty shootouts?" Since losing 4-3 on penalties to Argentina in 1998, the Three Lions have gone on to lose another three shootouts in major tournaments - to Portugal in the 2004 European Championship and the 2006 World Cup, and to Italy in the 2012 European ​Championship.

After England's 4-1 thrashing by Germany in the first knockout round in South Africa in 2010, and their tame exit after two matches in Brazil in 2014, even reaching a penalty shootout this summer would arguably count as progress for Gareth Southgate's side.