The 22-year-old Frenchman was due to play against ​Watford in the final day of the Premier League season on Sunday.

Jose on @AnthonyMartial: "He was injured on Friday and couldn’t train yesterday. He had treatment in the morning at the training ground and then stayed away. It’s his left knee." #MUFC pic.twitter.com/vEudAHX3Vn

However, despite initially reporting for duty at Old Trafford, Martial left the ground before kick off and did not feature in the squad.

His absence sent the rumour mill into overdrive, with some reports suggesting that the youngster had handed in a transfer request. Despite this, Manchester United insist that Martial is suffering from a knee injury.

A transfer request would not seem far fetched for Martial, who has fallen down the pecking order at Old Trafford following the arrival of Alexis Sánchez from ​Arsenal in January. 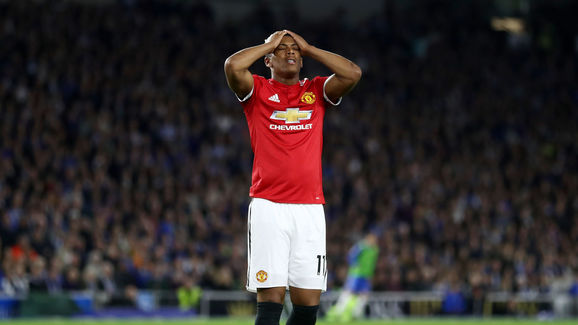 Several of the top clubs in Europe are said to be interested in signing Martial, with ​Chelsea, ​Juventus, ​Bayern Munich and Lyon making up a list of potential suitors.

However, Mourinho strongly denied the transfer request rumours when the question was put to him in a recent post-match press conference.

According to the ​Sun, Mourinho said: “Is it your rumour? No, it’s not true. He is injured and has been receiving treatment to his knee.”

Meanwhile, Mourinho has also given an update on Romelu Lukaku, who is looking to recover from injury ahead of this weekend's FA Cup final against Chelsea.

“We hope he can play in the final," Mourinho said. "He is in Belgium, having his treatment with communication between the doctors in Belgium and our medical department.

"We are just waiting to see if it's possible for him to be involved in the final. If not starting, then at least on the bench."