​Napoli president Aurelio De Lauretiis wants Maurizio Sarri to stay at the club, and will sit down with him 'next week' for discussion about his future.
​

Sarri's stock is sky high at the moment after so nearly guiding Napoli to their first Scudetto since 1990. At the time of writing, it is still mathematically possible for him to do so, but extremely unlikely. However, the former Empoli boss has garnered plaudits from across the world of football for instilling one of the most attractive brands of football in Europe today. The 59-year-old is proving himself to be a studious and proactive coach, ​and it has led to him supposedly being targeted by a number of big clubs.
​
​Two such clubs credited with interest in the Italian are ​Arsenal, who are losing Arsene Wenger at the end of the season, and ​Chelsea, who are likely to part ways with Antonio Conte.
​

Wenger will take charge of Arsenal for the final time against Huddersfield on Sunday, while behind the scenes, the club are ramping up their efforts to get a new man in before the World Cup. Chelsea meanwhile have regularly been linked Sarri, ​with a swap deal involving Conte heading to Naples among recent reports. 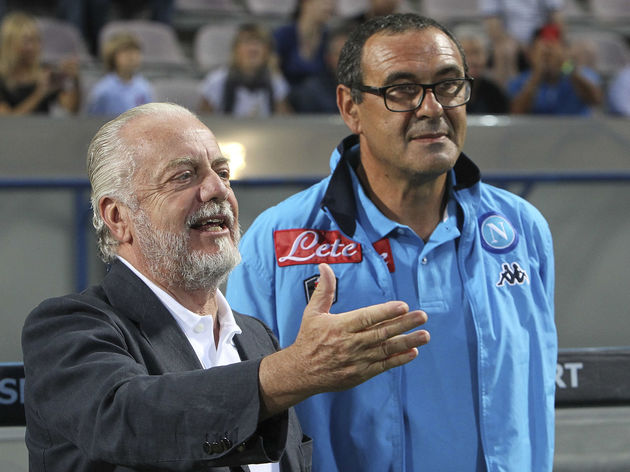 Sarri's recent comments in the media have led some to believe this may be his final season in charge at the Stadio San Paolo, but president De Laurentiis is hopeful he will remain.
​

As quoted by ​Football Italia, he said: "Will Sarri be here for pre-season? I hope so. I clearly have fewer doubts than you if you’re asking that question, but I can’t hold anyone by force.
​

Despite likely missing out on the Serie A title, Napoli have qualified for next season's Champions League, where they will seek to do far better than 2017/18 after failing to get out of their group. Whether that will be under the guidance of Sarri remains to be seen.