​Crystal Palace forward Wilfried Zaha has been named as the Premier League Player of the Month for April after notching four goals and one assists in just four games.

This is the first time that the Ivorian has won the award in his career, having begun the month by scoring a quite brilliant goal against Bournemouth, in which he performed an exquisite roulette past a defender before firing home. 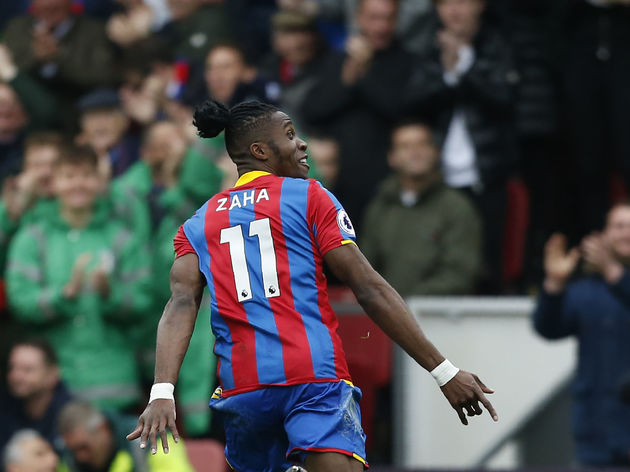 The 25-year-old then hit two goals in a Premier League game for the first time in his career against the Eagles' arch-rivals Brighton. Palace's number 11 opened the scoring with a poacher's effort, before powering a header past Mathew Ryan to secure a vital three points in the south London club's battle for survival.

Palace's academy graduate then played out an underwhelming 0-0 draw at Watford, although he should have earned his side a penalty only to be wrongly booked for diving.

Zaha then ended his exceptional month by recording a goal and an assist in Palace's 5-0 win over Leicester, in doing so playing a huge part in what turned out to be the club's biggest ever Premier League win.

With his eight Premier League goals this season, Zaha has recorded his best ever tally for goals at this level of football. What makes that all the more impressive is that the Ivory Coast international has missed nine games through injury.

Palace and Zaha welcome relegated West Brom to Selhurst Park for the season finale, so the 25-year-old has a decent chance to better his already impressive numbers.

Four-goal @wilfriedzaha is your #PL Player of the Month for April! @PremierLeague pic.twitter.com/Wej3Q2VWlJ

Elsewhere, Tottenham's Danish attacking midfielder Christian Eriksen has won April's Goal of the Month award for his thunderous strike against Chelsea at Stamford Bridge - a game which Spurs won 3-1.

Meanwhile, West Brom boss Darren Moore has won the Manager of the Month award for April, after recording wins against Manchester United at Old Trafford and Tottenham at the Hawthorns. Moore also guided the Baggies to a point against Liverpool after being 2-0 down, whilst he also grabbed three points against Newcastle.

Moore also became the first manager in Premier League history to win the Manager of the Month award and be relegated on the same day, after Southampton's win over Swansea sent the Baggies down to the Championship.