Champions Manchester City finally got their hands on the Premier League trophy this weekend despite being crowned as league's table-toppers more than three weeks ago.

But with excitement at the top of the table in short supply, fans of the Premier League can enjoy one of the most captivating relegation dogfights in recent years over the next week, following the latest round of fixtures in England's top flight.

Here a six of the best moments from the weekend's action... If you're gonna go out, you might as well go out in style. If Darren Moore pulls West Brom out of this he deserves an Manager of the season. Dont care about this Guardiola nonsense We live in a world now where the finances in football are just getting seriously out of hand, and its the fans who have to pay the price through increased ticket prices and expensive shirts each season. It is almost impossible for fans to put aside their differences on a matchday - especially with their biggest rivals.
But a group of ​Manchester City fans showed a real touch of class at the Etihad by unveiling a banner in support of former United boss Sir Alex
Biggest Kick in the Teeth 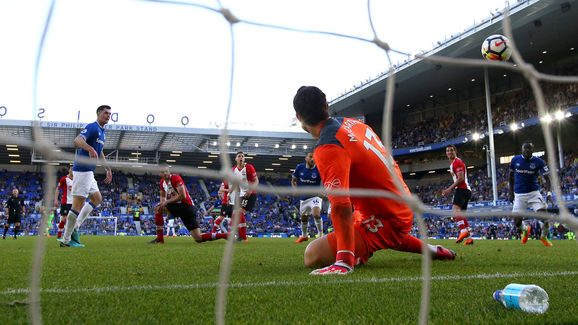 Oh Southampton, you were so close.
After taking the lead through Nathan Redmond at Goodison Park on Saturday the Saints looked on course to secure a deserved three points - which would have been vital in the club's fight against relegation.
Step forward, Tom Davies. The ​Everton star scored a goal in the 96th minute of the game to leave ​Southampton with just one point this weekend, and the strike was made all the more painful because of the hefty deflection it took off
Best Way to End an Era