Gareth Bale scored a stunning equaliser to cancel out Lionel Messi's solo goal at the Nou Camp in the 271st Clasico between Barcelona and Real Madrid, as Andres Iniesta played his final part in one of these epic encounters.

Iniesta is set to move to China in the coming months, but ran the show at times for ​Barca - who were reduced to ten men in the first half after Sergi Roberto lashed out in a coming together with Marcelo. Cristiano Ronaldo also scored for the visitors, but injured himself in the process - with concerns growing over his potential involvement in the Champions League final.

The newly crowned Spanish champions instantly took control of the match, seeing the majority of the ball inside ​Real Madrid's half, and it took just 10 minutes for the home side to take the lead, as Roberto delivered a fantastic cross to Luis Suarez - who neatly volleyed in his 30th goal of the season to give Barcelona an early lead. 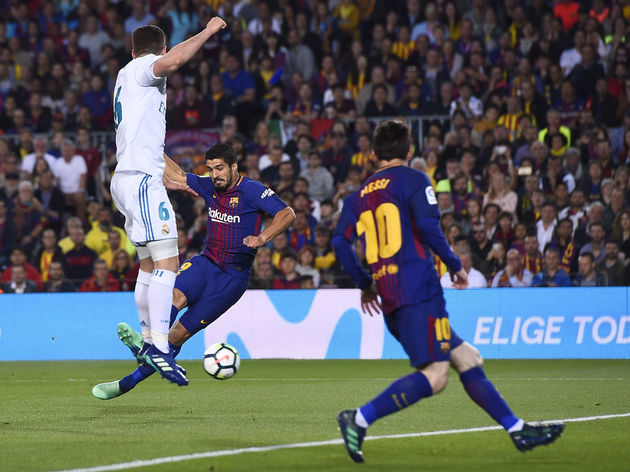 However, Madrid hit back within just five minutes, as Ronaldo raced into the box to tap-in a cushioned Karim Benzema header.

Ronaldo's goal clearly inspired Madrid, as the away side started to find their feet shortly after. The Portuguese international almost bagged another immediately after his goal, as the Barcelona defence fell asleep, but Marc-Andre Ter Stegen was wide awake to smartly stop Ronaldo's shot.

Despite Madrid's eyes firmly set on the Champions League final and Barcelona already champions of Spain, both teams were not stepping off the gas in this enticing match-up. The game started with a fiery atmosphere and it turned out to be strong theme in the match, with things reaching boiling point just before the end of the half.

Suarez and Sergio Ramos clashed, just before Messi decided to get in on the action with a poor tackle of his own on the Real defender. Messi found himself in the referee's book. Shortly after the incidents with Ramos, Barcelona right-back Roberto had his say.

The Spaniard raised his fist towards the face Marcelo after a confrontation between the two, the referee noticed and wasted no time in brandishing a red card for the Barcelona man.

The Brazilian milked it as much as he could, but the evidence of violent conduct was clear to see, and With one eye on Madrid's third consecutive Champions League final, Zinedine Zidane made a change - on came Marco Asensio for Cristiano Ronaldo. Despite Ronaldo's importance, Zidane was not willing to take the risk on his star man after seeing him twist his ankle in the process of scoring the first equaliser.

The sides came out to a slightly subdued atmosphere at the Camp Nou in the second-half, but Barcelona took little time in asserting their dominance once again. Messi, in typical Messi style, weaved his way around the Madrid defence, and neatly slotted the ball past Keylor Navas to restore Barcelona's lead. Shortly after the Argentine's goal, the world witnessed the end of an era, as Andres Iniesta departed the pitch to a standing ovation in his final Clasico encounter - Paulinho entered the fray as his replacement.

Enersto Valverde's men continued to control possession as the second-half went on. Messi had another glorious chance to score his 34th ​La Liga goal of the season, but Navas denied the Barcelona captain with a smart save. With Ronaldo watching from the bench, Madrid needed a moment of magic from someone else - and step forward Gareth Bale.

In the 72nd minute, the Welshman smashed in a delightful, curling effort into the top corner of Ter Stegen's goal, hitting his 19th goal of the season.

Zidane's men began to take advantage of the extra man, as Luka Modric and Toni Kroos began to pull the strings in the centre of the park. Barcelona continued to fight for the win tight until the final whistle, but Madrid's defence remained strong and Barcelona failed to find a way through.

Madrid had a glorious chance to steal all three points right at the end, as Bale tried an effort from long-range once again, but his attempt narrowly missed the Barcelona goal.

It was the Welshman's earlier goal that inevitably sealed a point for both sides in the end. Messi's earlier solo goal was enough for Barcelona to remain 'invincible' however, with the Spanish champions finishing the game still unbeaten in La Liga.

The gap remains 15 points between Barcelona in first and Madrid in third.