Goals from Joao Mario and Mark Noble were enough for West Ham to earn all three points against Leicester City in a game they dominated for large spells. Mario gave the visitors the lead in the first half before a stunning Noble volley after half time eased relegation fears for David Moyes' side.

​With ​West Ham in desperate need of the points, the visitors made a bright start at the King Power Stadium. Manuel Lanzini looked lively, seeing a pair of goal-bound attempts 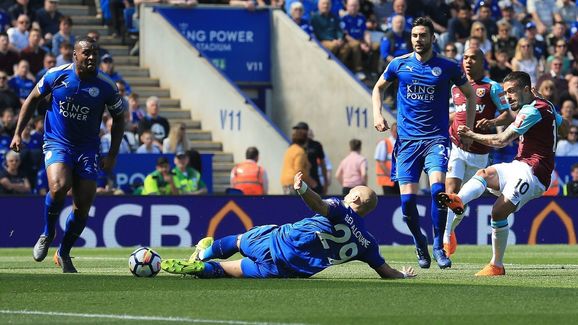 Claude Puel's side looked well off the pace throughout the first half as chances continued to fall for the Hammers. Arnautovic was unlucky to be denied twice in the space of a couple of minutes by initially Ben Hamer, before seeing an

​Leicester began the second half with more impetus than they exhibited in the entirety of the first period. A long ball gave Jamie Vardy the chance use his pace, putting a covering Aaron Creswell under pressure, and was perhaps fortunate to only see yellow after seeming to handle the ball whilst falling as Vardy looked to be through on goal.

David Moyes' side however always looked a threat on the counter and wasted a golden opportunity to double their lead. Arnautovic saw two attempts blocked in a matter of seconds by youngster Hamza Choudhury and Christian Fuchs

The game now had an end-to-end feel as Leicester went close just past the hour with a Harry Maguire half-volley, before a stunning strike from Mark Noble gave the Hammers some breathing space. Taking on the volley from all of 25 yards after the ball fell to him from a free kick, firing his shot into Hamer's bottom right off the post

2️⃣ changes with Chicha missing from the squad through injury and Joe Hart through illness. pic.twitter.com/hGSHnrEWK2