​Arsenal and France defender Laurent Koscielny could potentially miss out on this year's World Cup in Russia, following what is suspected to be a serious Achilles injury.

The player went down clutching his ankle just seven minutes into the Gunners' Europa League second-leg semi final tie against Atletico Madrid on Thursday night and had to be stretchered off of the pitch as he appeared to be in immense pain.

BREAKING: Laurent Koscielny has torn his Achilles and is set to miss the 2018 World Cup. pic.twitter.com/Quk1bVYNFz

Koscielny, who has had Achilles issues in the past, appears unlikely to return to action this season, according to initial reports, and could see what may be his last trip to the World Cup pass him by.

“I have some problems,” he said after being quizzed over his Achilles last year, going on to reveal that he has been treating it every morning. 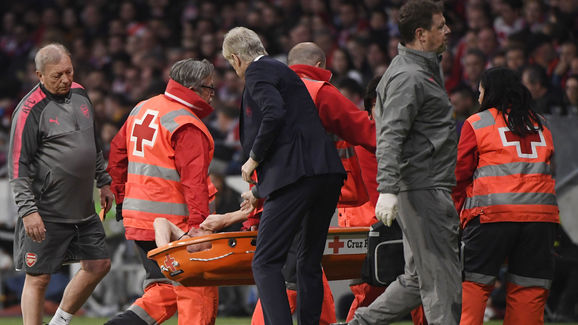 “Now it is better. I know it is a difficult injury because you need to work every day on this.Every morning I have my treatment for my Achilles and I know I need to do this to the end of my career."

Arsenal fans and the football community took to Twitter to commiserate what appeared to be a nasty blow to the France international at such a crucial point in the season:

Looks like a serious injury for Laurent Koscielny. What a shame in a big game like this and just 6 weeks before the World Cup.

Worth noting that it was Diego Costa who got play stopped there, even though Atletico had the ball and were on the attack. Was standing right next to Koscielny, and will have known immediately it was bad.