​Barcelona captain Andres Iniesta did not train with the first team squad on Thursday, with reports claiming he is suffering from discomfort in his left calf muscle.

The four-time Champions League winning club legend, who ​recently confirmed his decision to leave the club which has been his home for the last 22 years, skipped training as a precautionary measure but is likely to still be in contention to play some part in what will be his final ever Clásico encounter.

Several sources in Spain, including ​Marca and ​Mundo Deportivo (MD) reported that Iniesta has been suffering from a problem with his soleus muscle since the Copa Del Rey final win over Sevilla, and he was only introduced to the field five minutes from the end in last Sunday's title-clinching win over Deportivo La Coruña. 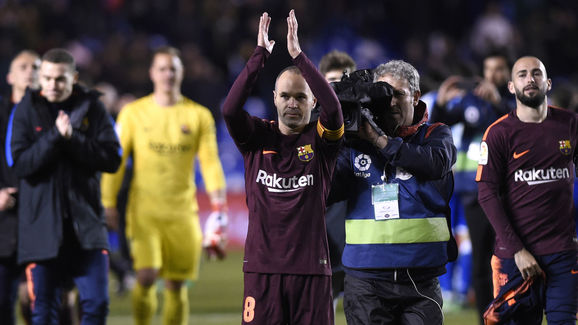 While Marca and MD both remain pretty positive about Iniesta's chances of being fit for Sunday's clash with Real Madrid, ​AS claim that the man with 37 Clásicos under his belt is 'not guaranteed' to make it 38, as he spent Thursday doing individual work on the injury.

AS note that while Iniesta is desperate to play on Sunday, he also has take into consideration the upcoming World Cup with Spain - which will also be his last.

Speculation about the nine-time La Liga winner's next destination has been rife since rumours started that he would leave Barcelona at the end of the season. The smart money appears to be on the 33-year-old moving to the Chinese Super League, with Chongqing Dangdai Lifan tipped as the destination.

Some, however, have ambitiously suggested that ​Pep Guardiola's Man City could still tempt the veteran to stay in Europe.

​Reports have indicated that Chongqing Iniesta will make Iniesta the third-highest paid footballer in the world for his services, while (more incredibly) also investing millions to import the star's wine to China as part of the deal.