A man who loved ​West Bromwich Albion even more than its own fans, ‘Don’t-Mess-With-The-Zoltan’ Gera is one of this list’s most fondly remembered names.

He came to the Premier League in 2004, having impressed in the European Championships that summer. Hungary hadn’t actually been at the tournament but Gera had apparently watched a lot of the games, which was more than enough for Baggies manager Gary Megson.

He made his debut in August, replacing Andy Johnson (no not that one, nor that one, ​this one) (Above: Gera watching Euro 2004, a performance that caught the eye of Gary Megson)

Starting to get the wrong kind of attention from the press, Gera stopped sprinting around on his hands and knees and began to find his feet in Premier League football. West Brom survived that season, and Megson paid tribute to his Magyar mainstay at the end of the campaign, saying, “Zoltan was also in our squad.”

But it was in his second season that Gera would begin to certify his legendary status at West Brom. By the end of it he had featured in all 38 league matches, and must have been really tired. This amount of game time took its toll, though, and the midfielder missed much of his next season with a sports hernia, which doctors confirmed was due to the incredible amount of sports he’d been doing. (Above: Gera blocks a shot from fellow classic Luke Young)

During the summer of 2008, Zoltan moved to Fulham after his contract ended at the Hawthorns.

Apparently only able to make his debut against ​Hull, Gera’s time in London started with a 2-1 loss at the KCOM stadium, but at 1-1, the Hungarian had a shot that was so bad it earned him the catchy nickname: ‘All-The-Gera-No-Idea.’

As the embers of his Fulham career began to fizzle out, Gera would make one final statement in London before boinging back to his beloved Baggies. In the final game of the season, Mark Hughes’ side hosted ​Arsenal in what appeared to be a menial and somewhat pointless fixture. As the game entered its final phase, Zoltan was brought on in an attempt to change the future of Fulham FC.

Having received no red cards all season, ​Fulham were perilously close to qualifying to for the 2011/12 Europa League in the ‘Fair Play’ spot, clearly something Gera felt must be avoided at all costs. 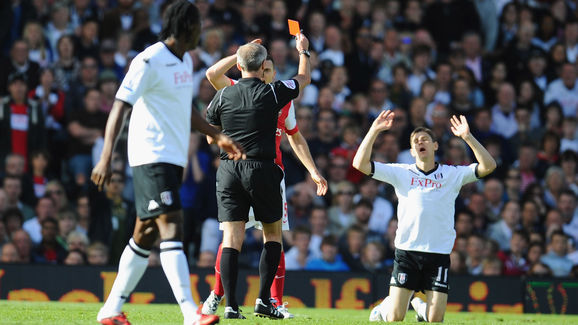 (Above: 'All-The-Gera' drops to his knees, after realising his red card isn't enough to prevent Fulham entering the Europa League)

Within five minutes of being on the pitch, the Magyar flew about a foot into the air, and landed with both feet on Thomas Vermaelen’s leg; the referee couldn’t pull his red card out fast enough. Convinced it was job done, Zoltan skipped down the tunnel only to discover the crushing news that Fulham still qualified for Europe ​by 0.01 ‘points’, which sounds really close.

Zoltan Gera amassed 30 goals in 251 games in English football, and on top of his classy consistency and die-hard attitude, will be remembered for those painfully slow backflips that always featured in his celebrations. He also did score one of the most important goals in Fulham’s history: the winner in a Europa League semi-final against Hamburg, which put the Cottagers into their first European final. With 97 international caps, he is one of the most talented players to enter our list of ​Premier League classics.

Back at Budapest outfit Ferencváros, boasting to teammates that he once shared a pitch with Richard Chaplow.