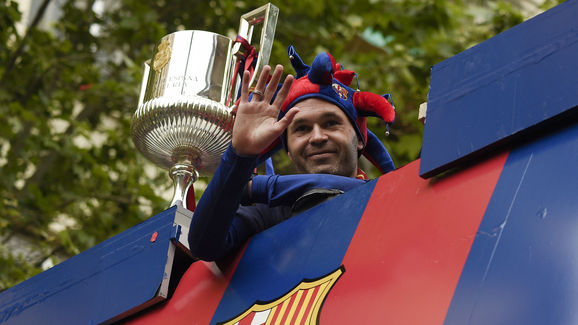 Since 2010, Iniesta has been the owner of Bodega Iniesta - a vineyard and winery located in the small Spanish region of Fuentealbilla. As part of their bid to sign Iniesta,

The proposed deal includes an obligation to purchase six million bottles of wine from Iniesta's business. At €6 a bottle, that would mean the midfielder would earn a whopping €36m.

And that is not even nearly half of what Iniesta to stands to make. According to the report, Chongqing Dangdai Lifan would be willing to offer Iniesta a three-year-deal at a rate of €27m-a-year. That would give Iniesta a tax-free total of €81m by the end of the contract.

El Mundo reporting that Chongqing are to pay Iniesta €81m in wages over the next three seasons... and buy six million bottles of his wine at €6 a pop.

If south-west China has an alcohol problem in 2019, we know who to blame 

The man behind all this money who is desperate to bring Iniesta to Chongqing Dangdai Lifan is Chinese businessman Jiang Lizhang. Since January 2017, Lizhang has been the 90 percent owner of Chongqing, but already the businessman has his fingers in many sports-shaped pies.

Lizhang is also the owner of ​La Liga club CF Granada, at 60 percent shareholder in Serie B side Parma and part-owner of the NBA's Minnesota Timberwolves. His latest football venture involves the proposed takeover of Belgian side OH Leuven.

El Mundo report that despite all the money being thrown at Iniesta, he still has serious doubts about making the move to the Chinese Super League. The Spaniard also has another proposal from a different Chinese to club to consider, ​as well as the possibility of reuniting with Pep Guardiola at Manchester City.